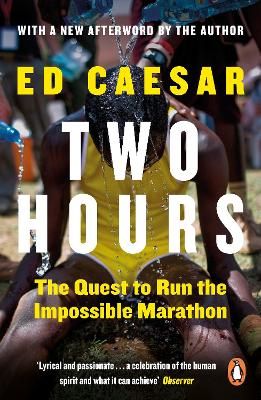 The Quest to Run the Impossible Marathon


Two hours, to cover 26 miles and 385 yards. It is running's Everest, a feat once seen as impossible for the human body. But now we can glimpse the mountain-top.
The sub-two hour marathon will require an exceptional feat of speed, mental strength and endurance. The pioneer will have to endure more, live braver, plan better, and be luckier than his forbearers. So who is he?
In this spellbinding book, Ed Caesar takes us into the world of the elite of the elite- the greatest marathoners on earth. Through the stories of these rich characters, and their troubled lives, he traces the history of the marathon as well as the science, physiology and psychology involved in running so fast, for so long. And he shows us why this most democratic of races retains its savage, enthralling appeal - why we are drawn to test ourselves to the limit.


'The marathon tethers runners to their own personal narratives. It is a question of how you grow. Nothing but your own body will sustain you; everything you have done in your life until the moment you cross the finishing line is connected to the effort' » Have you read this book? We'd like to know what you think about it - write a review about Two Hours book by Ed Caesar and you'll earn 50c in Boomerang Bucks loyalty dollars (you must be a Boomerang Books Account Holder - it's free to sign up and there are great benefits!)

Ed Caesar is a thirty-five year-old British non-fiction writer. His stories have been published by The New Yorker, The New York Times, GQ and The Sunday Times. The winner of nine major journalism awards, he was named Journalist of the Year for 2014 by the Foreign Press Association. His subjects have included conflict in central Africa, the world's longest tennis match and tracking down stolen art. Two Hours is his first book.

A Preview for this title is currently not available.
More Books By Ed Caesar
View All