Two In The Field

Description - Two In The Field by Darryl Brock

Modern-day reporter Sam Fowler, hero of "If I Never Get Back", manages to break into the past once again - but now it is 1875, and America is a darker place, gripped in economic depression. Again he falls in with ballplayers, but this time spins off on his own, seeking the whereabouts of Cait, the woman he loves. His knight-like quest, bristling with hazards, causes him to ride the rails with tramps, deal with starving miners and the desperate Molly Maguires, work in a Saratoga casino, venture out onto the Nebraska prairies, and finally head into the Black Hills accompanied by Cait, a former slave and a Sioux guide, to face the ultimate reckoning of his life. In the midst of all this, Sam attempts to deal with his conflicted conscience over leaving his two daughters behind in his other life. Again we meet historic characters: Twain, George Armstrong Custer, Crazy Horse and star ballplayers of the day. At the end, Sam finds his true home and family.

Other Editions - Two In The Field by Darryl Brock 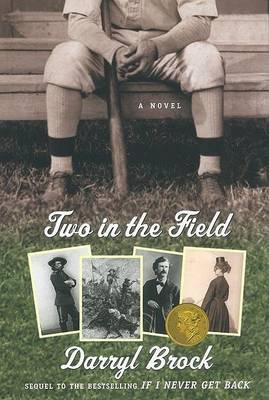 Book Reviews - Two In The Field by Darryl Brock

» Have you read this book? We'd like to know what you think about it - write a review about Two In The Field book by Darryl Brock and you'll earn 50c in Boomerang Bucks loyalty dollars (you must be a Boomerang Books Account Holder - it's free to sign up and there are great benefits!)

For the better part of two decades, Darryl Brock was a history, English, and psychology instructor in San Francisco Bay Area high schools. He holds a BA from the University of Redlands and has many graduate units in history at UC Berkeley. He has served as a writing consultant to the State of California and worked with Educational Testing Service to establish essay-scoring programs. Since 1984, Brock has been a full-time freelance writer, and is the author of numerous articles and reviews, many of them about early baseball and/or Mark Twain.He is an accomplished public speaker on the subjects of the Red Stockings, early baseball in general, and his experience in researching those pioneer pros. He is heavily involved in the world of baseball, attending Society for American Baseball Research (SABR) regional meetings and occasionally national conventions, as well as other baseball organizations' functions.Darryl Brock lives in Berkeley, California, with his wife and daughter.

A Preview for this title is currently not available.
More Books By Darryl Brock
View All