Two Riders Were Approaching: The Life & Death of Jimi Hendrix

It is widely considered in music, there are two eras-before Hendrix and after Hendrix. Regarded as the greatest guitarist of all time, Jimi Hendrix is the embodiment of rock 'n' roll. His career only spanned four years but in that time he managed to influence generations of musicians from Freddie Mercury to the Red Hot Chili Peppers and Slash.Born Johnny Allan Hendrix in Seattle in 1942, Jimi had a difficult childhood living in the care of relatives with only sporadic visits to his mother. Music became his sanctuary and in the mid-60s he had his career breakthrough creating The Jimi Hendrix Experience. Renowned for his incredible performances, Jimi played the guitar like never before. Famous for playing the guitar with his teeth and lighting his instrument on fire, Hendrix's innovative and experimental sound won over UK rock royalty and legions of US fans. But there was a dark side to Hendrix, he would become angry and violent after days of mixing alcohol and illicit drugs. Tragically in 1970 he was found dead in a London flat. The real reason behind his death is still disputed. Hendrix managed to change music forever in just four years. With access to key members of Jimi's circle, critically acclaimed writer Mick Wall will deliver an explosive and celebratory biography offering fans a chance to see the real Hendrix and learn the truth behind his untimely death.

Other Editions - Two Riders Were Approaching: The Life & Death of Jimi Hendrix by Mick Wall 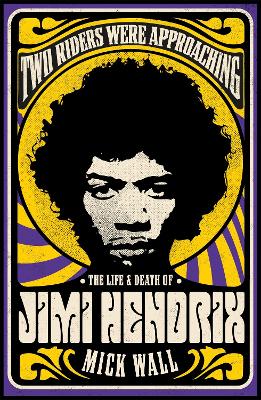 » Have you read this book? We'd like to know what you think about it - write a review about Two Riders Were Approaching: The Life & Death of Jimi Hendrix book by Mick Wall and you'll earn 50c in Boomerang Bucks loyalty dollars (you must be a Boomerang Books Account Holder - it's free to sign up and there are great benefits!)


A Preview for this title is currently not available.
More Books By Mick Wall
View All