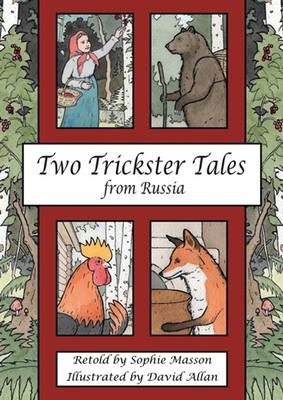 Meet a brave little girl called Masha who outwits a big bad bear with some tasty pies, and a beautiful but none too bright rooster, his long-suffering friends, and a cunning fox! Two Trickster Tales from Russia is the launch title for Christmas Press, a new Australian publisher specialising in beautiful picture books for children which feature traditional stories from many lands, retold by well-known authors and stunningly illustrated in a classic style. Two Trickster Tales from Russia includes the lively, funny Russian folktales, Masha and the Bear and The Rooster with the Golden Crest, retold in a fresh and engaging style by award-winning writer Sophie Masson, author of more than fifty books for children and young adults. It is the first book for new illustrator David Allan, and his gorgeous illustrations are inspired by classic Russian children's picture books. Suitable for a wide age range, Two Trickster Tales from Russia is a delight to read aloud to young children, as well as for older children to read on their own, and makes a wonderful gift for Christmas and any time of the year.

» Have you read this book? We'd like to know what you think about it - write a review about Two Trickster Tales from Russia book by Sophie Masson and you'll earn 50c in Boomerang Bucks loyalty dollars (you must be a Boomerang Books Account Holder - it's free to sign up and there are great benefits!)

Sophie Masson is the award-winning and internationally-published author of more than 50 books for children, young adults and children, she was born in Indonesia of French expatriate parents and came to Australia as a school-age child, spending much of her childhood shuttling between France and Australia, in the process developing an intense love of writing and reading. Her delight in traditional stories, combined with a lifelong fascination with Russia, a country she has visited several times, has resulted in several books with a Russian theme, including two novels, The Firebird (Hachette 2001) and Scarlet in the Snow(Random House Australia 2013), and her first picture book, Two Trickster Tales from Russia, which is the realisation of a long-held dream. Sophie says: The stories in Two Trickster Tales from Russia, Masha and the Bear and The Rooster with the Golden Crest are two folk tales that are well-loved in Russia, but not so well-known outside it. I chose them because the two of them embody a lively sense of fun--it's great to see the small and apparently powerless outwitting big brutes or cunning schemers! There's also a strong feel of the woods, which are so much a part of Russian life and culture. And there's a great rhythm to the stories which I've added to by having little verses here and there. David Allan completed a Diploma in Fine Art and has been part of several Fine Art exhibitions of Landscapes and Portraits in Oils. He's worked in bookshops and as a graphic designer and web designer, but always dreamed of becoming an illustrator. Influences in his work include classic illustration masters such as Arthur Rackham and Russian illustrator Ivan Bilibin (especially for Two Trickster Tales), along with Art Nouveau artist Alphonse Mucha and more recent illustrators such as Alan Lee and William Stout. Two Trickster Tales from Russia is his first book. He is currently working on another title for Christmas Press. David says: For the artwork I used pen and watercolour on paper. The style for this book is pretty much an extension of what I normally do. Prior to starting the project, Sophie introduced me to the work of the great Russian Illustrator Ivan Bilibin whose work I had somehow missed before and now love. His use of a clean line and areas of flat colour style has been a huge influence on the look of the illustrations I produced for Two Trickster Tales from Russia. Fiona McDonald is a graduate of the Julian Ashton Art School in Sydney, Fiona McDonald has worked as a graphic designer, doll-maker, cloth sculptor and artist. She is also the author of several books of non-fiction, including the best-selling The Popular History of Graffiti(Skyhorse Publishing 2013), as well as an illustrated novel for younger readers, Ghost Doll and Jasper(Skyhorse, 2012). Currently she works as a graphic designer as well as running her own toy-making business, Granny Fi's Toy Cupboard.