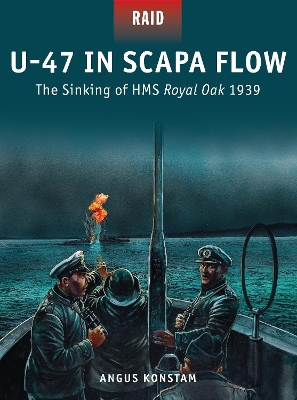 Description - U-47 in Scapa Flow by Angus Konstam

At the outset of World War II, Scapa Flow was supposed to be the safe home base of the British Navy - nothing could penetrate the defences of this bastion. So how, in the dead of night, was Gunther Prien's U-47 able to slip through the line of protective warships to sink the mighty Royal Oak? This book provides the answer with an account of one of the most daring naval raids in history. Drawing on the latest underwater archaeological research, this study explains how Prien and his crew navigated the North Sea and Kirk Sound to land a devastating blow to the British. It reveals the level of disrepair that Scapa Flow had fallen into, and delves into the conspiracy theories surrounding the event, including an alleged cover-up by the then First Sea Lord, Winston Churchill.

Book Reviews - U-47 in Scapa Flow by Angus Konstam

» Have you read this book? We'd like to know what you think about it - write a review about U-47 in Scapa Flow book by Angus Konstam and you'll earn 50c in Boomerang Bucks loyalty dollars (you must be a Boomerang Books Account Holder - it's free to sign up and there are great benefits!)

Angus Konstam hails from the Orkney Islands, and is the author of over 50 books, 30 of which are published by Osprey. This acclaimed and widely published author has written several books on piracy, including The History of Pirates, and Blackbeard: America's Most Notorious Pirate. A former naval officer and museum professional, he worked as the Curator of Weapons at the Tower of London and as the Chief Curator of the Mel Fisher Maritime Museum in Key West, Florida. He now works as a full-time author and historian, and lives in Edinburgh, Scotland. Peter Dennis was inspired by contemporary magazines such as Look and Learn he studied illustration at Liverpool Art College. Peter has since contributed to hundreds of books, predominantly on historical subjects, including many Osprey titles. Born in Malaya in 1949, Alan Gilliland studied photography/film and architecture, and has worked as a photojournalist and cartoonist. He also spent 18 years as the graphics editor of The Daily Telegraph, winning 19 awards in that time, including numerous UK Press Awards. He now writes, illustrates and publishes fiction (www.ravensquill.com), as well as illustrating for a variety of publishers (including Osprey, the Penguin Group, Brown Reference Group, Ivy Group and Aurum), architects and developers, such as John McAslan (Olympic Energy Centre) and Kit Martin (Prince Charles' Phoenix Trust advisor on historic buildings). www.alangilliland.com