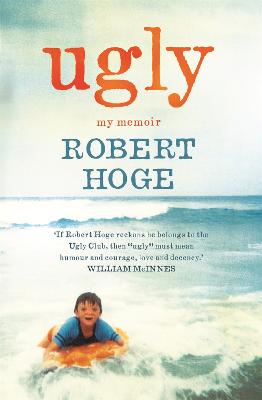 Robert Hoge was born with a giant tumour on his forehead, severely distorted facial features and legs that were twisted and useless. His mother refused to look at her son, let alone bring him home. But home he went, to a life that, against the odds, was filled with joy, optimism and boyhood naughtiness.Home for the Hoges was a bayside suburb of Brisbane. Robert's parents, Mary and Vince, knew that his life would be difficult, but they were determined to give him a typical Australian childhood. So along with the regular, gruelling and often dangerous operations that made medical history and gradually improved Robert's life, there were bad haircuts, visits to the local pool, school camps and dreams of summer sports. UGLY is Robert's account of that life, from the time of his birth to the arrival of his own daughter. It is a story of how the love and support of his family helped him to overcome incredible hardships. It is also the story of an extraordinary person living an ordinary life, which is perhaps his greatest achievement of all.

» Have you read this book? We'd like to know what you think about it - write a review about Ugly: My Memoir book by Robert Hoge and you'll earn 50c in Boomerang Bucks loyalty dollars (you must be a Boomerang Books Account Holder - it's free to sign up and there are great benefits!)

Robert Hoge has worked as a journalist, a speechwriter, a science communicator for the CSIRO and a political advisor to the former Queensland Premier and Deputy Premier. He has had numerous short stories, articles, interviews and other works published in Australia and overseas. He also enjoys photography, disability advocacy and social engagement. While he never got far with his professional lawn bowls career, Robert did carry the Olympic torch in 2000. He is married and lives in Brisbane.

Assessing Adolescents in Educational, Counseling, and Other Settings
$41.57 $41.99