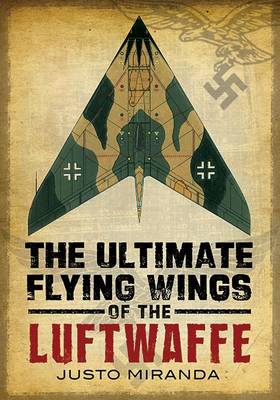 Ultimate Flying Wings of the Luftwaffe

Description - Ultimate Flying Wings of the Luftwaffe by Justo Miranda

Key Selling Points:* An extra-ordinary books which chronicles for the first time the outlandish designs that the Germans were working on in 1945* Presents a historical framework and performance details for each model* Profusely illustrated with technical drawings and gives exhaustive coverage of different models and variants* Technical data and measures for modellers* Written by the best-selling author of "Ultimate Piston Fighters of the Luftwaffe" ISBN: 9781781552490It might have happened. With the Allied forces pushing into Germany, a desperate Hitler launched the next breed of German aircraft. Imagine a strange triangular bomber, that could not be detected by radar or intercepted by fighters, launching an inextinguishable ball of fire over London which destroys the city and its surroundings up to the sea. Or perhaps a black boomerang sixty meters long drops two tons of anthrax over Washington and New York, making them uninhabitable for fifty years. Or perhaps a scenario where an allied bombing raid experiences massive casualties, savaged by an armada of new German fighters, the like of which the Allied gunners had never seen before. They are dart shaped, too fast for the gunners to take aim, so the new Nazi flying wings and triangles decimate the bombers with their cannon fire and missiles that were automatically activated by photo-electric cells. These things never occured. However, the construction of secret flying wings had commenced at the start of 1945 and one extraordinary new fighter took to the skies on its only test flight. If these radical fighters of the Luftwaffe had been pressed into service earlier, they may well have changed the outcome of the Second World War. Profusely illustrated with technical drawings and fascinating data and information on the Luftwaffe's most radical fighter and bomber projects, The Ultimate Flying Wings of the Luftwaffe chronicles these revolutionary designs. A fascinating book for the military historian, enthusiastic modelers and those interested in the more extreme side of World War 2 aviation, this book shows how advanced German scientists were towards the end of the Second World War and how close Hitler may have come in winning after all.

» Have you read this book? We'd like to know what you think about it - write a review about Ultimate Flying Wings of the Luftwaffe book by Justo Miranda and you'll earn 50c in Boomerang Bucks loyalty dollars (you must be a Boomerang Books Account Holder - it's free to sign up and there are great benefits!)

Justo Miranda is the author of books and monographs on aviation since the 1980s. A widely known historian, Miranda specialises in aviation of the 1930s and is the author of two volumes on aircraft used during the Spanish Civil War. The exciting discovery of a microfilm on secret German weapons in the early 1990s drove him to publish Secret Wonder Weapons of the Third Reich, later published by Schiffer in 1996. Miranda's first book for Fonthill Media was the critically acclaimed The Ultimate Piston Fighters of the Luftwaffe.