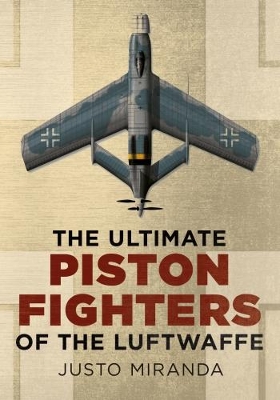 Ultimate Piston Fighters of the Luftwaffe

Description - Ultimate Piston Fighters of the Luftwaffe by Justo Miranda

The development of aviation engines in Germany was revolutionary during closing stages of the Second World War. In 1945, the Daimler Benz, Jumo and BMW engines in service, equipped with power boosting systems, generated 2,000 hp. There were prototypes that could generate 3,000 hp and BMW/Argus projects could reach 4,000 hp. To benefit from their extreme performances, Blohm und Voss, Daimler Benz, Dornier, Focke Wulf, Heinkel, Henschel, Messerschmitt and Skoda designed an impressive series of fighters that never left the drawing board. The reason was the decision taken by the Oberkommando der Luftwaffe to mass manufacture the iconic and revolutionary Messerschmitt Me 262 jet fighter. This lost generation of projects were quickly forgotten and after years of research have been recovered and presented in The Ultimate Piston Fighters of the Luftwaffe. Profusely illustrated with technical drawings and fascinating data and information on the Luftwaffe's most radical fighter projects, The Ultimate Piston Fighters of the Luftwaffe chronicles these revolutionary designs that might have changed the course of the war. A fascinating book for the military historian, modellers and those interested in aviation, this shows how advanced German scientists were towards the end of the Second World War and how the beloved Spitfire and Mustang would have been instantly superseded by radical Nazi fighters.

» Have you read this book? We'd like to know what you think about it - write a review about Ultimate Piston Fighters of the Luftwaffe book by Justo Miranda and you'll earn 50c in Boomerang Bucks loyalty dollars (you must be a Boomerang Books Account Holder - it's free to sign up and there are great benefits!)

Justo Miranda is the author of books and monographs on aviation since the 1980s. A widely known historian, Miranda specialises in aviation of the 1930s and is the author of two volumes on aircraft used during the Spanish Civil War. The exciting discovery of a microfilm on secret German weapons in the early 1990s drove him to publish Secret Wonder Weapons of the Third Reich, later published by Schiffer in 1996. Since then, Miranda has published Reichdreams and Unknown!, monographs on little known airplane projects.