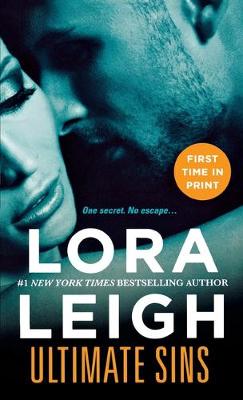 A New York Times bestseller, Ultimate Sins is the final book in the sexy, suspenseful Callahan series from Lora Leigh.

Three men, bound by blood, will stop at nothing to protect the women who have stolen their hearts and who they have claimed as their own-no matter what the price.

A FORBIDDEN LOVE
Ex-Marine Crowe Callahan has only had one obsession in life: Amelia Sorenson. She is the only one who has ever gotten under his skin. However, she is also the daughter of his family's sworn enemy: a man who has sought to destroy the Callahans for generations in order to further his own nefarious agenda.

A DANGEROUS FATE
When Amelia put herself on Crowe's side and in Crowe's bed, she became her father's enemy as well. When Wayne Sorenson escapes capture, both Amelia and Crowe know it is only a matter of time before he resurfaces to exact his revenge. Now Crowe will claim Amelia in order to bait a killer and end things once and for all. But can he protect the woman he can't seem to live without from one of the deadliest enemies he has ever known? And will he survive if he can't? in Ultimate Sins.

"Leigh's books can scorch the ink off the page."-Romantic Times BOOKreviews

» Have you read this book? We'd like to know what you think about it - write a review about Ultimate Sins book by Lora Leigh and you'll earn 50c in Boomerang Bucks loyalty dollars (you must be a Boomerang Books Account Holder - it's free to sign up and there are great benefits!)


A Preview for this title is currently not available.
More Books By Lora Leigh
View All