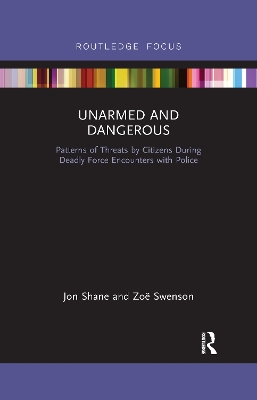 Unarmed and Dangerous: Patterns of Threats by Citizens During Deadly Force Encounters with Police

Description - Unarmed and Dangerous: Patterns of Threats by Citizens During Deadly Force Encounters with Police by Jon Shane

There is tremendous controversy across the United States (and beyond) when a police officer uses deadly force against an unarmed citizen, but often the conversation is devoid of contextual details. These details matter greatly as a matter of law and organizational legitimacy. In this short book, authors Jon Shane and Zoe Swenson offer a comprehensive analysis of the first study to use publicly available data to reveal the context in which an officer used deadly force against an unarmed citizen. Although any police shooting, even a justified shooting, is not a desired outcome-often termed "lawful but awful" in policing circles-it is not necessarily a crime. The results of this study lend support to the notion that being unarmed does not mean "not dangerous," in some ways explaining why most police officers are not indicted when such a shooting occurs. The study's findings show that when police officers used deadly force during an encounter with an unarmed citizen, the officer or a third person was facing imminent threat of death or serious injury in the vast majority of situations. Moreover, when police officers used force, their actions were almost always consistent with the accepted legal and policy principles that govern law enforcement in the overwhelming proportion of encounters (as measured by indictments).

Noting the dearth of official data on the context of police shooting fatalities, Shane and Swenson call for the U.S. government to compile comprehensive data so researchers and practitioners can learn from deadly force encounters and improve practices. They further recommend that future research on police shootings should examine the patterns and micro-interactions between the officer, citizen, and environment in relation to the prevailing law. The unique data and analysis in this book will inform discussions of police use of force for researchers, policymakers, and students involved in criminal justice, public policy, and policing.

Other Editions - Unarmed and Dangerous: Patterns of Threats by Citizens During Deadly Force Encounters with Police by Jon Shane 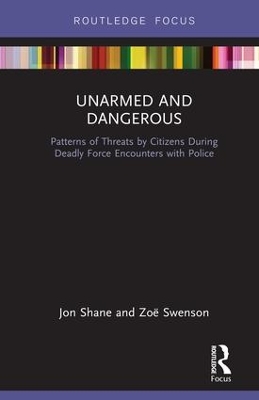 Book Reviews - Unarmed and Dangerous: Patterns of Threats by Citizens During Deadly Force Encounters with Police by Jon Shane

» Have you read this book? We'd like to know what you think about it - write a review about Unarmed and Dangerous: Patterns of Threats by Citizens During Deadly Force Encounters with Police book by Jon Shane and you'll earn 50c in Boomerang Bucks loyalty dollars (you must be a Boomerang Books Account Holder - it's free to sign up and there are great benefits!)


A Preview for this title is currently not available.
More Books By Jon Shane
View All

Unarmed and Dangerous: Patterns of Threats by Citizens During Deadly Force Encounters with Police
$92.70 $103.00