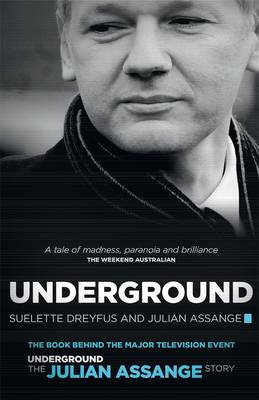 "The controversial book behind the new Robert Connoly film Underground, The Julian Assange Story - described as a 'tale of madness, paranoia and brilliance', The Weekend Australian."

"The controversial book behind the new Robert Connoly film Underground, The Julian Assange Story - described as a 'tale of madness, paranoia and brilliance', The Weekend Australian. Suelette Dreyfus and embattled Wikileaks founder, Julian Assange, tell the compelling true story of the computer underground and the bizarre lives and crimes of an elite group of young hackers who, in the 1980s and 1990s, took on the forces of the establishment. Using home computers, they conquered some of the world s biggest and most powerful organisations, including the US military. By day, sat in suburban school classrooms. By night they were knee-deep in NASA networks. Brilliant and obsessed, many of them found themselves addicted to hacking. Some descended into drug addiction and madness. Others were convicted and served time in gaol before slowly piecing their lives back together. From the inside, Dreyfus and Assange reveal this shadowy world of hidden identities and secret information. 'Underground is an adventure book for the brain .. Cowboys .. roamed unpatrolled electronic frontiers. Some made it into the systems of powerful organisations, where the hackers would l

Other Editions - Underground by Suelette Dreyfus 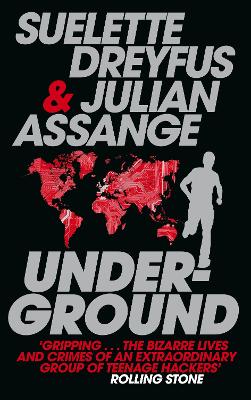 » Have you read this book? We'd like to know what you think about it - write a review about Underground book by Suelette Dreyfus and you'll earn 50c in Boomerang Bucks loyalty dollars (you must be a Boomerang Books Account Holder - it's free to sign up and there are great benefits!)

Dr Suelette Dreyfus is an award-winning writer and journalist. In addition to writing the first major book about computer hacking in Australia, Underground, she was the Associate Producer of a documentary about hackers. Her articles have appeared in magazines and news papers such as The Independent (London), The Age, The Sydney Morning Herald and The Australian. She began work on Underground while completing her PhD. She is a Research Fellow at the University of Melbourne, where she runs several major research projects in information systems. Julian Assange is an internet activist, journalist and publisher. Born and raised in Australia, Julian is the founder, spokesperson and editor in chief of WikiLeaks, a whistleblower website that started in 2006. In 2010 WikiLeaks began to publish hundreds of thousands of classified details about American involvement in the wares in Afghanistan and Iraq, which created a media storm. At the end of 2010, the site published a series of classified US diplomatic cables, now known as Cablegate. What followed with Julian Assange is now the subject of much media interest.