Coaches are amongst the most visible figures in sport today but little is known about the history of their profession. This book examines the history of coaching from the early nineteenth to the late twentieth century. It uses a number of sports as case studies that includes: cricket, swimming, rugby union, athletics, football and tennis. The focus is largely English but international examples are used to illuminate the British context. A number of themes are explored. Initially, in the 1800s, the coach was like an artisan who learned his skills on the job and coaching was similar to a craft. Early coaches were professionals but from the late nineteenth century an amateur elite governed British sport, who inhibited and in some sports banned coaching. As the twentieth century progressed though different sports at different stages began to embrace coaching as international competition intensified. In addition, the nature of coaching changed as a more scientific and managerial approach was applied. Finally, in football, the export of early British coaches is examined in light of the migration of international athletes and also as a process of 'knowledge transfer'.
This book was published as a special issue of Sport in History. 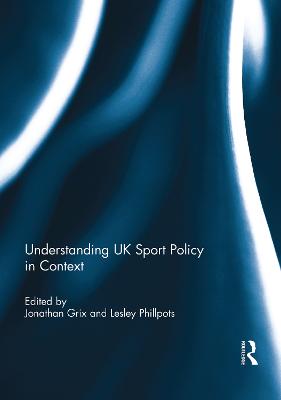 » Have you read this book? We'd like to know what you think about it - write a review about Understanding UK Sport Policy in Context book by Jonathan Grix and you'll earn 50c in Boomerang Bucks loyalty dollars (you must be a Boomerang Books Account Holder - it's free to sign up and there are great benefits!)

Jonathan Grix is a political scientist in the UK whose work focuses on sport and politics and sport policy. Grix is also an expert on the East German sport system. Recent papers on sport have been published in leading journals including Public Administration (2010), Public Policy and Administration (2010) and British Politics (2010). Lesley Phillpots' research interests focus primarily upon policy for sport, school sport and physical education. She has recently published on the governance of sport; youth sport development and county and school sport partnerships, including leading policy journals such as Public Policy and Administration (2010). She is currently investigating the experiences of female PGA golf professionals in the man's world of golf.

A Preview for this title is currently not available.
More Books By Jonathan Grix
View All

Challenges to Emerging and Established Powers: Brazil, the United Kingdom and Global Order
$249.48 $252.00