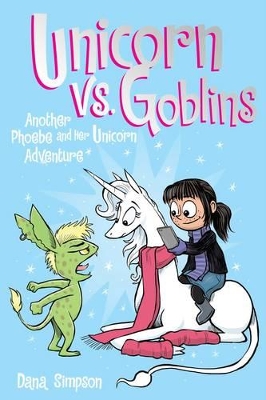 Unicorn vs. Goblins (Phoebe and Her Unicorn Series Book 3)

Another Phoebe and Her Unicorn Adventure

Description - Unicorn vs. Goblins (Phoebe and Her Unicorn Series Book 3) by Dana Simpson

School's out! That means no more teachers, no more books, and lots of time to compliment Marigold Heavenly Nostrils on her good looks. In this third volume, Phoebe and her obligational best friend, Marigold, learn that summer still has plenty of surprises for the both of them. All of our old friends are back-Phoebe's part-time "frenemy" Dakota, upon whom Marigold has bestowed sentient hair, Phoebe's goofy parents, and even Lord Splendid Humility (but please, ignore his magnificence if you can)! Have fun as Phoebe and Marigold continue the "Phoebegold Detective Agency," spend a week at Wolfgang Music Camp, and find themselves in more misadventures, thanks to Marigold's enchanted sparkles! Along the way, Phoebe makes some new friends, such as Sue-her unique clarinet-playing bunkmate, Florence Unfortunate Nostrils, Marigold's estranged sister, and Camp Wolfgang's lake monster who enjoys tacos and Wi-Fi. When school resumes, read along as Phoebe enjoys (or suffers from) a brief case of popularity, mentally catalogs her grievances against dodge ball, and, with Marigold's help, rescues Dakota and her hair from the queen of the goblins. Through these wacky adventures, Phoebe and Marigold learn that their friendship is the second most magical thing of all, after Marigold's beauty, of course.

Includes an introduction by Cory Doctorow and his daughter Poesy!

» Have you read this book? We'd like to know what you think about it - write a review about Unicorn vs. Goblins (Phoebe and Her Unicorn Series Book 3) book by Dana Simpson and you'll earn 50c in Boomerang Bucks loyalty dollars (you must be a Boomerang Books Account Holder - it's free to sign up and there are great benefits!)

Dana Claire Simpson grew up in Gig Harbor, Washington, drawing the entire time. She eventually graduated from The Evergreen State College, despite having spent all her time drawing, and not always for credit. Attempts at doing real work along the way are hardly worth mentioning; the relevant fact is that, from 1998 to 2008, she drew the internet comic strip Ozy and Millie. After winning the Amazon-sponsored Comic Strip Superstar Contest in 2009, Universal Uclick signed her to a development deal for Heavenly Nostrils, which was later renamed Phoebe and Her Unicorn. She currently lives in the Seattle area with her tech genius husband and her fairly stupid cat.

Camping with Unicorns: Another Phoebe and Her Unicorn Adventure
$15.11 $17.99

The Unicorn Whisperer: Another Phoebe and Her Unicorn Adventure
$15.11 $17.99

Virtual Unicorn Experience: Another Phoebe and Her Unicorn Adventure
$15.11 $17.99