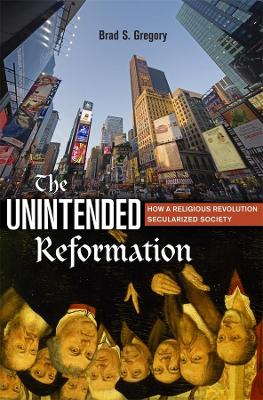 How a Religious Revolution Secularized Society

In a work that is as much about the present as the past, Brad Gregory identifies the unintended consequences of the Protestant Reformation and traces the way it shaped the modern condition over the course of the following five centuries. A hyperpluralism of religious and secular beliefs, an absence of any substantive common good, the triumph of capitalism and its driver, consumerism?all these, Gregory argues, were long-term effects of a movement that marked the end of more than a millennium during which Christianity provided a framework for shared intellectual, social, and moral life in the West.

Before the Protestant Reformation, Western Christianity was an institutionalized worldview laden with expectations of security for earthly societies and hopes of eternal salvation for individuals. The Reformation's protagonists sought to advance the realization of this vision, not disrupt it. But a complex web of rejections, retentions, and transformations of medieval Christianity gradually replaced the religious fabric that bound societies together in the West. Today, what we are left with are fragments: intellectual disagreements that splinter into ever finer fractals of specialized discourse; a notion that modern science?as the source of all truth?necessarily undermines religious belief; a pervasive resort to a therapeutic vision of religion; a set of smuggled moral values with which we try to fertilize a sterile liberalism; and the institutionalized assumption that only secular universities can pursue knowledge.

The Unintended Reformation asks what propelled the West into this trajectory of pluralism and polarization, and finds answers deep in our medieval Christian past.

Other Editions - The Unintended Reformation by Brad S. Gregory

» Have you read this book? We'd like to know what you think about it - write a review about Unintended Reformation book by Brad S. Gregory and you'll earn 50c in Boomerang Bucks loyalty dollars (you must be a Boomerang Books Account Holder - it's free to sign up and there are great benefits!)


A Preview for this title is currently not available.
More Books By Brad S. Gregory
View All