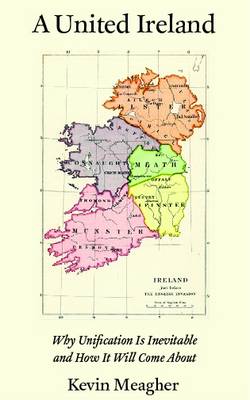 Why Unification is Inevitable and How it Will Come About

'The Irish question' has dogged British politics in one form or another since at least the time of the 1800 Act of Union and the abolition of the Irish Parliament, as the British state struggled to establish a popular mandate to govern Ireland. A United Ireland outlines the various political strands conspiring to make a single Irish state the most plausible end-point of this age-old issue and speculate about how this will come about.

» Have you read this book? We'd like to know what you think about it - write a review about United Ireland book by Kevin Meagher and you'll earn 50c in Boomerang Bucks loyalty dollars (you must be a Boomerang Books Account Holder - it's free to sign up and there are great benefits!)

Kevin Meagher is associate editor of the political blog Labour Uncut and a former special advisor to Shaun Woodward, Northern Ireland Secretary from 2007 to 2009. He works as a political and communications consultant and regularly writes for a range of publications including the New Statesman and The Independent.

A Preview for this title is currently not available.
More Books By Kevin Meagher
View All