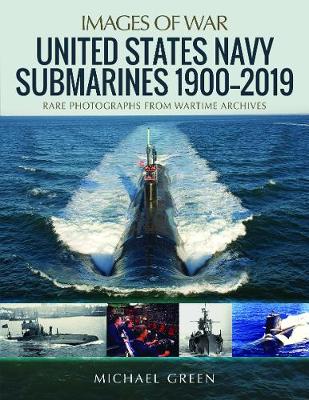 In 1900 the US Navy took into its first submarine, the Holland VI, into service. With a single torpedo tube, it had a crew of six, weighed 82 tons and travelled submerged at 6.2mph at a depth of up to 75 feet. Contrast this to the 18 Ohio Class nuclear-powered submarines which entered service in 1981. Weighing 21,000 tons with a crew of 155, its underwater speed is estimated at 30mph at a depth of some 1,000 feet. It carries 16 nuclear warhead ballistic missiles with a range of 4,600 miles. This latest Images of War title provides a detailed insight into the many US Navy submarine classes. Particularly fascinating is the post Second World War programme of nuclear powered submarines stating with the Nautilius and progressing to the Skate, Thresher, Sturgeon, Los Angeles and George Washington. Admiral Hyman G Rickover's role as Father of the nuclear navy is examined in detail. This superbly illustrated yet affordable book is a must for all naval enthusiasts. AUTHOR: Michael Green is the author of numerous acclaimed books in the Images of War series including Armour in Vietnam, US Navy Aircraft Carriers, US Battleships, The Patton Tank, US Naval Aviation, American Infantry Weapons, MI Abrams Tank, Combat Aircraft of the USAF, Allied Tanks of the Second World War, Allied AFVs of the Second World War, Axis Tanks of the Second World War , Axis AFVs of WW2, US Military Helicopters and United States Airborne Divisions 1942-2018. He lives in California. 250 colour and b/w illustrations

» Have you read this book? We'd like to know what you think about it - write a review about United States Navy Submarines 1900-2019: Rare Photographs from Wartime Archives book by Michael Green and you'll earn 50c in Boomerang Bucks loyalty dollars (you must be a Boomerang Books Account Holder - it's free to sign up and there are great benefits!)


A Preview for this title is currently not available.
More Books By Michael Green
View All