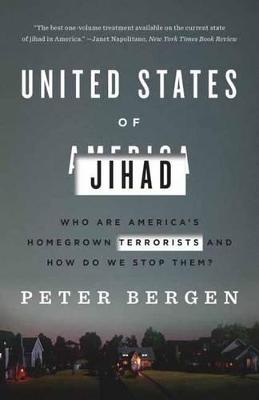 Who Are America's Homegrown Terrorists, and How Do We Stop Them?

A riveting, panoramic look at "homegrown" Islamist terrorism from 9/11 to the present

Since 9/11, more than three hundred Americans-born and raised in Minnesota, Alabama, New Jersey, and elsewhere-have been indicted or convicted of terrorism charges. Some have taken the fight abroad- an American was among those who planned the attacks in Mumbai, and more than eighty U.S. citizens have been charged with ISIS-related crimes. Others have acted on American soil, as with the attacks at Fort Hood, the Boston Marathon, and in San Bernardino. What motivates them, how are they trained, and what do we sacrifice in our efforts to track them?

Paced like a detective story, United States of Jihad tells the entwined stories of the key actors on the American front. Among the perpetrators are Anwar al-Awlaki, the New Mexico-born radical cleric who became the first American citizen killed by a CIA drone and who mentored the Charlie Hebdo shooters; Samir Khan, whose Inspire webzine has rallied terrorists around the world, including the Tsarnaev brothers; and Omar Hammami, an Alabama native and hip hop fan who became a fixture in al Shabaab's propaganda videos until fatally displeasing his superiors.

Drawing on his extensive network of intelligence contacts, from the National Counterterrorism Center and the FBI to the NYPD, Peter Bergen also offers an inside look at the controversial tactics of the agencies tracking potential terrorists-from infiltrating mosques to massive surveillance; at the bias experienced by innocent observant Muslims at the hands of law enforcement; at the critics and defenders of U.S. policies on terrorism; and at how social media has revolutionized terrorism.

Lucid and rigorously researched, United States of Jihad is an essential new analysis of the Americans who have embraced militant Islam both here and abroad.
From the Hardcover edition.

» Have you read this book? We'd like to know what you think about it - write a review about United States Of Jihad book by Peter Bergen and you'll earn 50c in Boomerang Bucks loyalty dollars (you must be a Boomerang Books Account Holder - it's free to sign up and there are great benefits!)

Peter Bergen is vice president at New America in Washington, DC, as well as national security analyst for CNN, where he writes a weekly online column. He is also a professor and codirector of the Center on the Future of War at Arizona State University and has held teaching positions at the Kennedy School of Government at Harvard University and at the School of Advanced International Studies at Johns Hopkins University. Bergen is the author of four previous books about terrorism, including three New York Times bestsellers and three Washington Post nonfiction books of the year. His books have been translated into twenty languages and made into four documentaries, and his writing has appeared in the New York Times, the Washington Posta,the Wall Street Journal, The Atlantic, Rolling Stone, Time, Foreign Affairs, Vanity Fair, and elsewhere. In 1997, as a producer for CNN, Bergen produced Osama bin Laden's first television interview, in which bin Laden declared war against the United States for the first time to a Western audience. He lives in Washington, DC, with his wife, documentary producer Tresha Mabile, and his children, Pierre and Grace.

A Preview for this title is currently not available.
More Books By Peter Bergen
View All