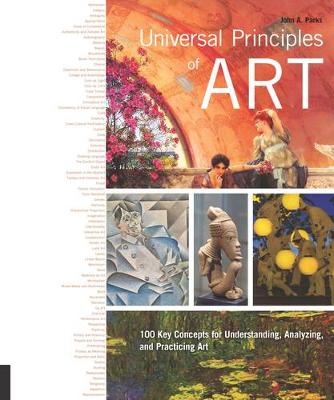 John A A Parks

Description - Universal Principles of Art by John A A Parks

A follow-up to Rockport Publishers' best-selling Universal Principles of Design, a new volume will present one hundred principles, fundamental ideas and approaches to making art, that will guide, challenge and inspire to make better, more focused art.

Universal Principles of Art serves as a wealth of prompts, hints, insights and roadmaps that will open a world of possibilities and provide invaluable keys to both understanding art works and generating new ones.

Respected artist John A. Parks will explore principles that involve both techniques and concepts in art-making, covering everything from the idea of beauty to glazing techniques to geometric ideas in composition to minimalist ideology. Techniques are simple, direct and easily followed by any artist at any level.
This landmark reference is the standard for artists, historians, educators, professionals and students who seek to broaden and improve their art expertise.

Book Reviews - Universal Principles of Art by John A A Parks

» Have you read this book? We'd like to know what you think about it - write a review about Universal Principles of Art book by John A A Parks and you'll earn 50c in Boomerang Bucks loyalty dollars (you must be a Boomerang Books Account Holder - it's free to sign up and there are great benefits!)

Author Biography - John A A Parks

A widely published writer on art and art techniques, John A. Parks trained at the Royal College of Art in London in the 1970's and subsequently pursued a career in New York, exhibiting his work with several of the most renowned art galleries in the city. His work has received considerable critical acclaim, including a review in the New York Times by Roberta Smith, the chief art critic. Parks' paintings are represented in a number of museum collections including the Victoria and Albert Museum in London and the Museum of the Rhode Island School of Design. Parks has been a member of the faculty at the School of Visual Arts in New York since 1979 teaching a broad array of courses in painting and drawing at every level, from undergraduate to post-graduate. He has also taught courses for adults for many years amassing wide experience in presenting approaches to making art to people of every background and time of life. In the early 90's Parks began to write for the art magazines using a concise and lucid style that makes his writing highly accessible to a broad audience. He has since written more than 150 feature articles for publications such as American Artist Magazine, Drawing Magazine, Watercolor Magazine as well as pieces for the New York Times. His writing has explored very broad array of subjects, ranging from profiles of contemporary artists such as Lucien Freud and Wayne Thiebaud, to historical figures such as Rubens, Raphael and Whistler. His writings on art technique again cover considerable ground including a major article on the painting technique of Velu00e1zquez as well as pieces on quill pen drawing, watercolor and gouache techniques. Parks also published a regular column on the business of art in American Artist Magazine.

A Preview for this title is currently not available.
More Books By John A A Parks
View All