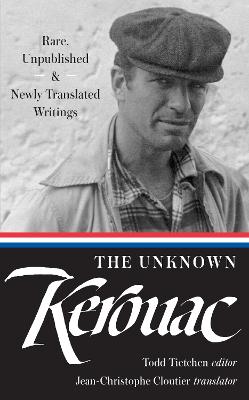 A major literary event- a stunning collection of long lost, never-before-published, and newly translated writings by the legendary author of On the Road.

A major literary event- a stunning collection of long lost, never-before-published, and newly translated writings by the legendary author of On the Road.
"I am French-Canadian, put into the world in New England. When I am mad, I often swear in French. When I dream, I often dream in French. When I cry I always cry in French." The Library of America continues its acclaimed Kerouac edition with this remarkable gathering of previously unpublished writings, including two novellas originally written in the French-Canadian dialect journal. This unprecedented collection offers intimate glimpses of the growth of Kerouac's mind and art, revealing him, for the first time, to have been essentially an immigrant writer, one whose extraordinary style emerged as a fusion his native and adopted languages. It opens with a series of early essays on Frank Sinatra and bebop that reveal Kerouac to have an acute observer of the postwar cultural scene. The newly translated novellas "The Night Is My Woman" (La Nuit est ma femme), from 1957-the last work he wrote before composing the On the Road scroll-and "Old Bull in the Bowery" (Sur le chemin)-an alternate version of On the Road written in five days in Mexico-provide missing links in Kerouac's path to a wholly new style of storytelling. Also included is the pivotal 1951 journal in which Kerouac experiences the breakthrough that leads him to write On the Road, the late reflective works "Memory Babe" and "Beat Spotlight," which offer detailed portraits of his youth and his struggle with fame; and a penetrating interview with his friend and fellow Beat John Clellon Holmes.

» Have you read this book? We'd like to know what you think about it - write a review about Unknown Kerouac book by Jack Kerouac and you'll earn 50c in Boomerang Bucks loyalty dollars (you must be a Boomerang Books Account Holder - it's free to sign up and there are great benefits!)

Todd Tietchen, editor, is Associate Professor of English at the University of Massachusetts, Lowell. He edited Jack Kerouac's The Haunted Life and Other Writings (2014) and the Library of America volume Kerouac: Visions of Cody, Visions of Gerard, Big Sur (2015). Jean-Christophe Cloutier, translator, is Assistant Professor of English at the University of Pennsylvania. He edited La vie est d'hommage (2016), a comprehensive volume of Kerouac's original French writings.