The decidedly raven-haired Miss Phryne Fisher returns to delve deep into the dark cellars of Melbourne.

1929: pretty little golden-haired girls are going missing in Melbourne. But they're not just pretty. Three of them are pregnant, poor girls from the harsh confines of the Magdalen Laundry. People are getting nervous.

Polly Kettle, a pushy, self-important Girl Reporter with ambition and no sense of self preservation, decides to investigate--and promptly goes missing herself.

It's time for Phryne and Dot to put a stop to this and find Polly Kettle before something quite irreparable happens to all of them. It's a tale of convents and plots, piracy, murder and mystery . . . and Phryne finally finds out if it's true that blondes have more fun.

'Elegant, fabulously wealthy and sharp as a tack, Phryne sleuths her way through these classical detective stories with customary panache.' The Age 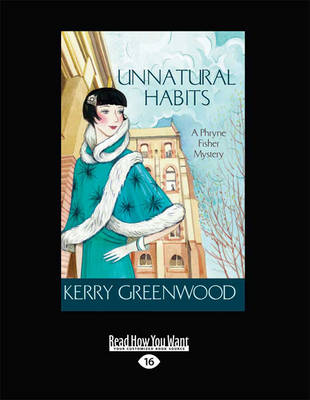 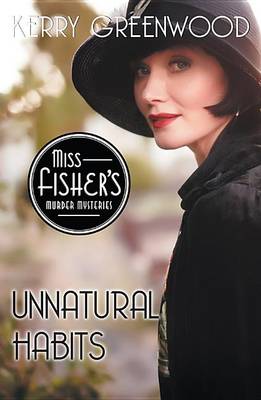 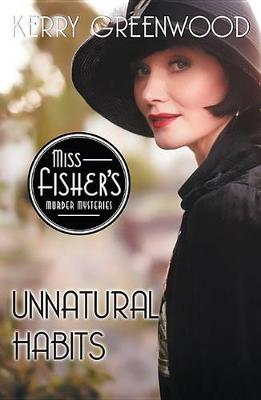 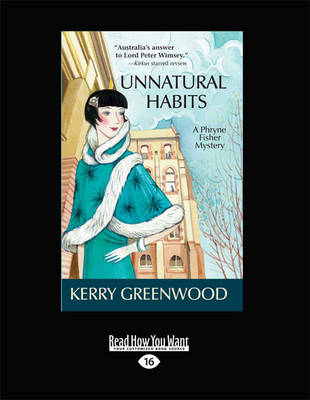 » Have you read this book? We'd like to know what you think about it - write a review about Unnatural Habits book by Kerry Greenwood and you'll earn 50c in Boomerang Bucks loyalty dollars (you must be a Boomerang Books Account Holder - it's free to sign up and there are great benefits!)

Unnatural Habits is the nineteenth book in the popular Phryne Fisher series by Australian author, Kerry Greenwood. A chance encounter with a young female reporter for The Daily Truth in a laneway leads Phryne Fisher to investigate the disappearance of three pregnant girls and said reporter. Margaret Kettle, better known as Polly, is determined to make her name as a serious journalist and steals a colleague’s story on White Slavery. But her enquiries into the fate of three very pregnant teenagers last seen at a pious widow’s nursing home mark the last sighting of the enthusiastic if somewhat careless reporter.

Her questions in a variety of places have ruffled some feathers, but whose? Someone associated with the Convent of the Good Shepherd and their workhouse-like Magdalen Laundry business? The owners of local brothels or exclusive Gentlemen’s Clubs? Or does her disgruntled colleague have a hand in her disappearance? What does the employment agency, Jobs For All, have to do with it? And just who is going around performing involuntary vasectomies on deserving males?

In this instalment, Phryne makes full use of her daughters (on vacation from school), of Dot, of her new employee, Tink and of her taxi drivers, Bert and Cec. Her minions (as she repeatedly refers to them in this instalment) are put to work on a secret code and other researches as well as taking active parts in the interrogation of witnesses. Phryne adopts an assortment of disguises: a blonde actress, a pregnant girl and a nun, as required by the different strands of the investigation. As well as white slavery, eugenics, virginity tests, kidnapping, slave labour and a female-run fruit-growing collective all feature. With this excellent novel, Greenwood once again proves herself a mistress of historical crime fiction.

Kerry Greenwood is the author of many bestselling novels and the editor of two collections. Previous novels in the Phryne Fisher series are Cocaine Blues, Flying too High, Murder on the Ballarat Train, Death at Victoria Dock, Blood and Circuses, The Green Mill Murder, Ruddy Gore, Urn Burial, Raisins and Almonds, Death Before Wicket, Away with the Fairies, Murder in Montparnasse, The Castlemaine Murders, Queen of the Flowers, Death by Water, Murder in the Dark, Murder on a Midsummer Night and Dead Man's Chest. She is also the author of the Corinna series, which includes Earthly Delights (2004), Heavenly Pleasures (2005), Devil's Food (2006), Trick or Treat (2008), Forbidden Fruit (2010) and Cooking the Books (2011).She is also the author of several books for young adults and the Delphic Women series. When she is not writing she is an advocate in Magistrates' Court for the Legal Aid Commission. She is not married, has no children and lives with a registered wizard.