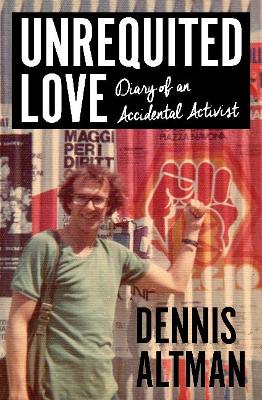 'Harvey was shot, along with Mayor George Moscone, in 1978, and San Francisco and much of the Castro feels as if not much has changed since he worked the streets to build a gay political machine. Where his camera shop stood there is now a manicure salon, next to the storefront of the Human Rights Campaign Fund, so that if one skews one's view it becomes possible to read their adjoining signs as: "Hand Jobs are a Human Right", as indeed they are.'

Dennis Altman first travelled from Australia to the United States when Lyndon Johnson was President, beginning a long obsession with the US. In the early 1970s he was involved in New York Gay Liberation; his 1971 study Homosexual: Oppression and Liberation, is widely regarded as a classic work in its field. In the 1980s Altman lived in San Francisco during the onset of the AIDS epidemic. Later he sat on the Australian National Council on AIDS and international organisations including, as president, the AIDS Society of Asia and the Pacific.

The election of Donald Trump took place while Altman was back in California on one of his frequent visits. In this diarised memoir, moving between Australia, the United States, Europe and parts of Asia, Gore Vidal, James Baldwin, Susan Sontag, Christopher Isherwood and many others people a story of a half century of activism, intellectualism, friendship and conflict.

'Dennis Altman's peripatetic book Unrequited Love moves from Australia to the United States, across Europe and parts of Asia. Filled with intellectual luminaries such as James Baldwin, Dorothy Porter, Susan Sontag, and Christos Tsiolkas, Altman's life and career has been intense and wide-ranging. The US counter culture of the mid-1960s, amid the early days of Gay Liberation, was the melting pot for his early writing, culminating in his 1971 study Homosexual: Oppression and Liberation. From here his work shifted and expanded with the changing terrain of sexual politics, including the AIDs epidemic, which he witnessed firsthand during his time in New York. Unrequited Love - a memoir in diaries - is the work of a hugely influential Australian writer and commentator.' - Sebastian Sharp, Australian Book Review

'From Lyndon Johnson to Trump, Altman's diary takes us from the early days of AIDS to gay liberation against a backdrop of Australia's strange love for America.' - Gillian Triggs

Other Editions - Unrequited Love: Diary of an Accidental Activist by Dennis Altman 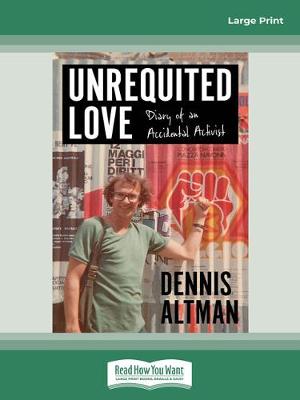 » Have you read this book? We'd like to know what you think about it - write a review about Unrequited Love: Diary of an Accidental Activist book by Dennis Altman and you'll earn 50c in Boomerang Bucks loyalty dollars (you must be a Boomerang Books Account Holder - it's free to sign up and there are great benefits!)