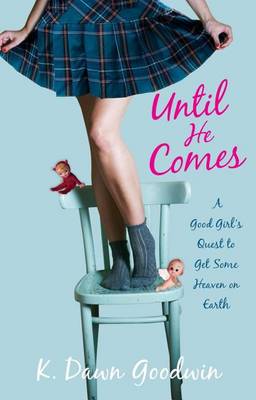 A Good Girl's Quest to Get Some Heaven on Earth

Description - Until He Comes by K. Dawn Goodwin

A hilarious, irreverent, and touching account of one seriously Christian girl's struggle to please any available savior. . . . K. Dawn Goodwin's holy crusade to be the Lord's sexiest spokesperson began at the tender-but far from innocent-age of seven. And while she always thought Jesus was kinda hot, even He could not quiet the avalanche of prepubescent lust and the burning wish for a man to find her, like Bathsheba, comely enough to spy on. Crucified by soulless pretty girls and cruel jocks whose mission it was to make her life hell on earth, adolescent Dawn, painfully obsessed with her own ugliness, found slivers of sweet relief in dry-humping the scrawniest guy on the wrestling team and scribbling bodice rippers starring her favorite teacher. But, Praise Jesus, at least her virginity was intact. Until college, where, thanks to a seriously sculpted Jew, Dawn's chastity crumbled like the Tower of Babylon. Her sex marathons kept her shouting, "Hallelujah!" but with her body image in apocalyptic disarray, her future husband unable to faith-heal her as promised, and the Bible threatening an extra-crispy afterlife, Dawn would have to face down her demons. Which was okay, because they were kinda hot too. . . .

Book Reviews - Until He Comes by K. Dawn Goodwin

» Have you read this book? We'd like to know what you think about it - write a review about Until He Comes book by K. Dawn Goodwin and you'll earn 50c in Boomerang Bucks loyalty dollars (you must be a Boomerang Books Account Holder - it's free to sign up and there are great benefits!)

Who She Is: Dawn Goodwin is the daughter of recovered fundamentalist missionaries and a graduate of Emory University in Atlanta, where she majored in English and Creative Writing, despite her fear-n-loathing of Famous Literature. Where Is She now: For the last fourteen years Goodwin has been living in rural western Georgia, meth capital of the Southeast. She now enjoys blowing stuff up, taking pictures of billboards, and shopping at the Dollar General. She is a single mom of three kids because of course. "When you're this far below the Bible belt," Goodwin explains, "there's really not much else to do but breed. And burn trash." Publishing History: Between lighting explosives, feeding her naked toddlers Diet Coke in their baby bottles, and letting them beat the hell out of an old rotary phone with some PVC pipe in the neighbor's ditch, she has published numerous freelance creative pieces in local and national papers, pimped out her essays for grant money, made insurance coding sound sexy, and had her book awarded Finalist in the Georgia Writer's Association 2013 Author of the Year competition-all that, while wearing nothing but a bathrobe and a bad bleach job, praise Jesus. "And when you're working that hard Lord," she says, "the carpet don't have time to be matchin no dang drapes."