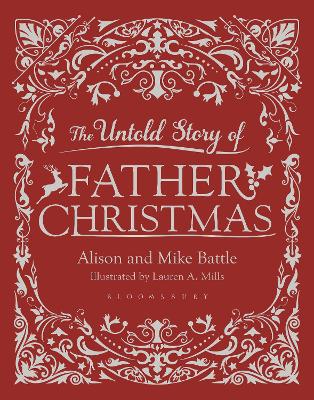 The Untold Story of Father Christmas

Description - The Untold Story of Father Christmas by Alison Battle

Have you ever wondered where Father Christmas came from? And how he ended up with a factory at the North Pole full of elves to help him make toys?

A beautifully illustrated and timeless story about how a toymaker and his wife became Mother and Father Christmas for children all over the world.

» Have you read this book? We'd like to know what you think about it - write a review about Untold Story of Father Christmas book by Alison Battle and you'll earn 50c in Boomerang Bucks loyalty dollars (you must be a Boomerang Books Account Holder - it's free to sign up and there are great benefits!)

Mike and Alison Battle founded the interactive Christmas experience in 2006, when they developed the original and innovative idea of recreating Father Christmas' mythical Arctic homeland.The company was born out of their personal frustration at the lack of quality magical Christmas experiences on offer to their own four children when first venturing into the world of Father Christmas visits with their young sons. Now in its tenth year, award winning LaplandUK has entranced and captivated thousands of young children receiving national and international acclaim together with royal and celebrity patronage for its unique Christmas experience. Described by Mumsnet founder Carrie Longton as `the Rolls Royce of Christmas experiences', LaplandUK is regularly featured on national TV and in the press and is widely regarded as the company putting the magic back into Christmas. Lauren A. Mills has won acclaim as a book author and illustrator. Her awards for childrens' books include: the Society of Childrens' Book Writers and Illustrators' Golden Kite Award for Best Picture book for her story, Fairy Wings, which she co-illustrated with her husband, Dennis Nolan. The Rag Coat, a story both written and illustrated by Mills won New York State's Charlotte Award for best picture book and Tatterhood and the Hobgoblins won the New England Design Award. Mills' work has exhibited in galleries and museums across the US including at the National Museum of Women in the Arts, where she was the keynote speaker, Lyman Allen Art Museum, Radcliffe College, Barnum Museum, and the Lyme Academy of Fine Arts. Mills' stories have been performed by storytellers and actors across the country and on the radio and The Rag Coat was performed as a ballet by the University of Utah. The New York Times described her watercolours as "alluring.... Whistlerian to the point of PreRaphaelitism." Smithsonian awarded The Rag Coat with the Season's Choice Award and described Mills' watercolours as "bewitching". The Washington Post wrote about The Rag Coat, "Mills' story is exquisite and complex, while her pictures are palely watercolor radiant." Mills' book illustrations are included in the collections of Keene State University, University of Connecticut at Storrs, and the Mazza Collection, Finlay, Ohio.