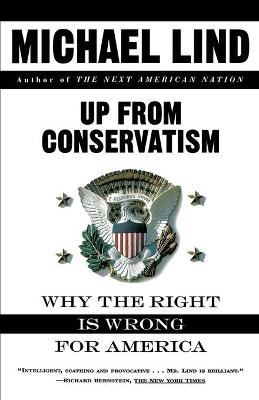 Description - Up from Conservatism by Michael Lind

For nearly a decade, Michael Lind worked closely as a writer and editor with the intellectual leaders of American conservatism. Slowly, he came to believe that the many prominent intellectuals he worked with were not the leaders of the conservative movement but the followers and apologists for an increasingly divisive and reactionary political strategy orchestrated by the Republican party. Lind's disillusionment led to a very public break with his former colleagues on the right, as he attacked the Reverend Pat Robertson for using anti-Semitic sources in his writings.

In Up From Conservatism, this former rising star of the right reveals what he believes to be the disturbing truth about the hidden economic agenda of the conservative elite. The Republican capture of the U.S. Congress in 1994 did not represent the conversion of the American public to conservative ideology. Rather, it marked the success of the thirty-year-old "southern strategy" begun by Barry Goldwater and Richard Nixon. From the Civil War to the civil rights revolution, the southern elite combined a low-wage, low-tax strategy for economic development with a politics of demagogy based on race-baiting and Bible-thumping. Now, Lind maintains, the economic elite that controls the Republican party is following a similar strategy on a national scale, using their power to shift the tax burden from the rich to the middle class while redistributing wealth upward.

To divert attention from their favoritism toward the rich, conservatives play up the "culture war," channeling popular anger about falling real wages and living standards away from Wall Street and focusing it instead on the black poor and nonwhite immigrants.


Book Reviews - Up from Conservatism by Michael Lind

» Have you read this book? We'd like to know what you think about it - write a review about Up from Conservatism book by Michael Lind and you'll earn 50c in Boomerang Bucks loyalty dollars (you must be a Boomerang Books Account Holder - it's free to sign up and there are great benefits!)


A Preview for this title is currently not available.
More Books By Michael Lind
View All