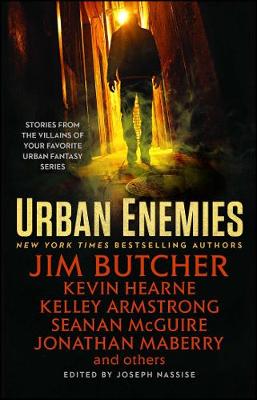 Villains have all the fun-everyone knows that-and this anthology takes you on a wild ride through the dark side! The top villains from seventeen urban fantasy series get their own stories-including the baddies of New York Times bestselling authors Jim Butcher, Kevin Hearne, Kelley Armstrong, Seanan McGuire, and Jonathan Maberry.

For every hero trying to save the world, there's a villain trying to tear it all down.

In this can't-miss anthology edited by Joseph Nassise (The Templar Chronicles), you get to plot world domination with the best of the evildoers we love to hate! This outstanding collection brings you stories told from the villains' point of view, imparting a fresh and unique take on the evil masterminds, wicked witches, and infernal personalities that skulk in the pages of today's most popular series.

» Have you read this book? We'd like to know what you think about it - write a review about Urban Enemies book by Jim Butcher and you'll earn 50c in Boomerang Bucks loyalty dollars (you must be a Boomerang Books Account Holder - it's free to sign up and there are great benefits!)

Jim Butcher is the author of the bestselling series "The Dresden Files" and the high fantasy series "The Codex Alera". "The Dresden Files" is also a successful series of audio books; an online roleplaying game; a series of comic books; and was a short-lived television series on SCI FI Channel. Kevin Hearne is the New York Times bestselling author of the Iron Druid Chronicles. He's a middle-aged nerd who still enjoys his comic books and old-school heavy metal. Visit him online at KevinHearne.com. Seanan McGuire is the author of Every Heart a Doorway, the October Daye urban fantasy series, the InCryptid series, and several other works, both standalone and in trilogies. She also writes darker fiction as Mira Grant. She was the winner of the 2010 John W. Campbell Award for Best New Writer, and in 2013 she became the first person ever to appear five times on the same Hugo ballot. Kelley Armstrong is the #1 New York Times bestselling author of the Otherworld series, as well as the New York Times bestselling young adult trilogy Darkest Powers, the Darkness Rising trilogy, and the Nadia Stafford series. She lives in rural Ontario, Canada with her husband and three children. Jonathan Maberry is a multiple Bram Stoker Award-winning author, magazine feature writer, playwright, content creator and writing teacher/lecturer. His novels include Ghost Road Blues (winner of the Stoker Award for Best First Novel in 2006), Bad Moon Rising, and Patient Zero. He writes The Black Panther comic for Marvel, as well as a variety of projects involving Wolverine and Spider-Man. Jeff Somers was born in Jersey City, New Jersey. After graduating college he wandered aimlessly for a while, but the peculiar siren call of New Jersey brought him back to his homeland. Visit him at JeffreySomers.com and WeAreNotGoodPeople.com, and on Twitter at @JeffreySomers. Joseph Nassise is the New York Times and USA TODAY bestselling author of more than thirty novels, including the internationally bestselling Templar Chronicles series, the Jeremiah Hunt trilogy, and the Great Undead War series. He also writes epic fantasy under the pseudonym Matthew Caine. He's a multiple Bram Stoker Award and International Horror Guild Award nominee and his work has been translated into seven languages.

A Preview for this title is currently not available.
More Books By Jim Butcher
View All