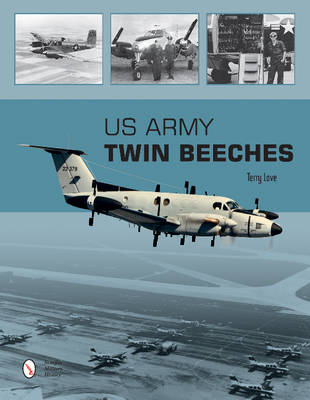 Most people think the US Army only flies helicopters, but it has quietly flown a multitude of fixed-wing aircraft for decades. One of the Army's best aircraft providers is Beech Aircraft of Wichita, Kansas. Beginning about the time of the Korean War and up to present day, the Army has utilised twin-engined Beech aircraft for an abundance of missions and duties. All of these Beech aircraft have been purchased off-the-shelf, instead of developing new aircraft for a specific mission, as they are much more economical to purchase and operate. Beeches have been used for almost every mission imaginable, from utilitarian, to VIP, to bombers, to photo-reconnaissance and surveillance to training. Some of the Beeches look really ""spooky"" due to their massive antenna arrays on the "reconnaissance" versions. This book will give you all of the "unclassified" details, data, information, and photos of these unique aircraft operated by the US Army. AUTHOR: Aviation historian Terry Love has loved aviation since age three, when he had his first flight in a Republic SeaBee. He flew with the US Army in Vietnam for two tours of duty beginning in June 1966. He flew in Bell UH-1 Hueys, deHavilland U-6A Beavers, U-1A Otters, and Beech U-21As. Terry earned his BS in aeronautics from Parks College of St. Louis University in 1971 and his master's degree (MBA) in 1976 from the University of Detroit. Terry has worked for North Central Airlines, Republic Airlines, and Northwest Airline, which is now Delta Airlines. He retired in 2005 after thirty-four years. Terry has written seventeen books, mostly on aviation history and/or airplanes. He has written dozens of magazine articles. This is his third book for Schiffer Publishing. 208 colour and b/w photos

» Have you read this book? We'd like to know what you think about it - write a review about US Army Twin Beeches book by Terry Love and you'll earn 50c in Boomerang Bucks loyalty dollars (you must be a Boomerang Books Account Holder - it's free to sign up and there are great benefits!)

Aviation historian Terry Love has loved aviation since his first flight at the age of three. He flew with the US Army for two tours in Vietnam. He has written seventeen books. He is retired from Delta Airlines. This is his third book for Schiffer Publishing.

A Preview for this title is currently not available.
More Books By Terry Love
View All