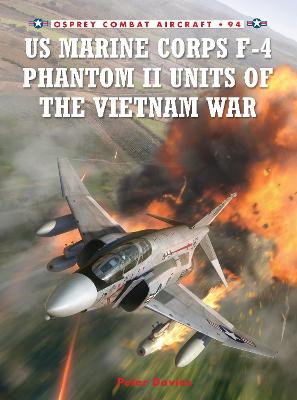 Twenty-five US Marine Corps squadrons flew versions of the Phantom II and 11 of them used the aircraft in South-East Asia from May 1965 through to early 1973. Rather than the air-to-air missiles that were the main component in the original F-4 armament, these aircraft carried an ever-expanding range of weaponry. Some toted 24,500-lb bombs and others strafed with up to three 20 mm gun pods, while most flew daily sorties delivering napalm, Snakeye bombs and big Zuni rockets. Many US Marines holding small outpost positions in Laos and South Vietnam against heavy Viet Cong attack owed their lives to the Phantom II pilots who repeatedly drove off the enemy. The book will examine these missions in the context of US Marine Corps close-support doctrine, using the direct experience of a selection of the aircrew who flew and organised those missions.

» Have you read this book? We'd like to know what you think about it - write a review about US Marine Corps F-4 Phantom II Units of the Vietnam War book by Jim Laurier and you'll earn 50c in Boomerang Bucks loyalty dollars (you must be a Boomerang Books Account Holder - it's free to sign up and there are great benefits!)

Peter E. Davies has published 20 books and several magazine articles, concentrating on modern combat aircraft and the Vietnam War. He has written seven previous Osprey titles and co-authored two others. The F-4 Phantom II in all its variants has been a main topic in eight of his previous books and he has close connections with former members of the F-4 Phantom II community. Jim Laurier is a native of New England, growing up in New Hampshire and Massachusetts. He has been drawing since he could hold a pencil and throughout his life he has worked in many mediums creating artwork on a variety of subjects. He has worked on the Osprey Aviation list since 2000 and in that time he has produced some of the finest artwork seen in these volumes. He has specialised in aircraft of the Vietnam War period.