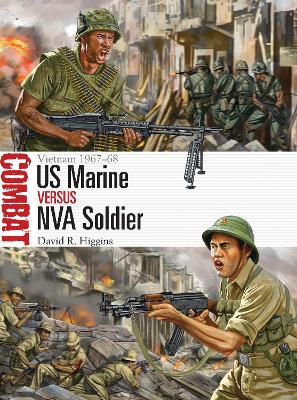 US Marine vs NVA Soldier

Description - US Marine vs NVA Soldier by David R. Higgins

In 1967-68, the United States Marine Corps (USMC) was on the front line of the defence of South Vietnam's Quang Tri province, which was at the very heart of the Vietnam conflict. Facing them were the soldiers of the North Vietnamese Army (NVA), men whose organization and equipment made them a very different opponent from the famous, irregular Viet Cong forces. From the 'Hill Battles' in April 1967 to the struggle for the city of Hue (January-March 1968) this bloody campaign forced the two sides into a gruelling trial of strength. The USMC held a general technological and logistical advantage - including close air support and airborne transport, technology, and supplies - but could not always utilize these resources effectively in mountainous, jungle, or urban environments better known by their Vietnamese opponents. In this arresting account of small-unit combat, David R. Higgins steps into the tropical terrain of Vietnam to assess the performance and experience of USMC and NVA forces in three savage battles that stretched both sides to the limit.

» Have you read this book? We'd like to know what you think about it - write a review about US Marine vs NVA Soldier book by David R. Higgins and you'll earn 50c in Boomerang Bucks loyalty dollars (you must be a Boomerang Books Account Holder - it's free to sign up and there are great benefits!)

David R. Higgins is the author of several military history books, including The Roer River Battles, King Tiger vs IS-2: Operation Solstice 1945 and Mark IV vs A7V: Villers-Bretonneux 1918. He has also written nearly 50 articles for magazines such as Strategy & Tactics, Armchair General, World at War and Modern War, and has appeared on television's 'Greatest Tank Battles'. He lives in Columbus, Ohio. Johnny Shumate works as a freelance illustrator living in Nashville, Tennessee. He began his career in 1987 after graduating from Austin Peay State University. Most of his work is rendered in Adobe Photoshop using a Cintiq monitor. His greatest influences are Angus McBride, Don Troiani, and Edouard Detaille. His interests include karate, running, Bible reading, history, and making English longbows.