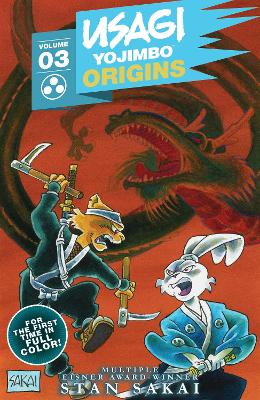 Presenting one of Usagi's greatest story arcs in an all-new full-color edition for the first time, giving new readers the perfect opportunity to explore the groundbreaking series, while offering long-time fans a new reading experience.

"Dragon Bellow Conspiracy" stands out among the early issues as the first novel-length storyline, combining all of the characters that had previously appeared separately into one epic tale!

A sinister plot to overthrow the Shogun percolates and one of Usagi's friends is captured! The ensuing machinations will draw in not only Usagi, but also bounty hunter Gen and the blind swordspig, Zato-Ino!

Beginning with these early issues find out why this series has won 10 Eisner Awards, two Harvey Awards, an American Library Association Award and has been called by Stan Lee, "one of the most original, innovative, well-executed comic books anywhere to be found."

Dragon Bellow Conspiracy collects the six-issue story from Usagi Yojimbo Vol. One, issues #13-18, originally published in black and white by Fantagraphics from December 1988 to October 1989.

» Have you read this book? We'd like to know what you think about it - write a review about Usagi Yojimbo Origins, Vol. 3: Dragon Bellow Conspiracy book by Stan Sakai and you'll earn 50c in Boomerang Bucks loyalty dollars (you must be a Boomerang Books Account Holder - it's free to sign up and there are great benefits!)


A Preview for this title is currently not available.
More Books By Stan Sakai
View All