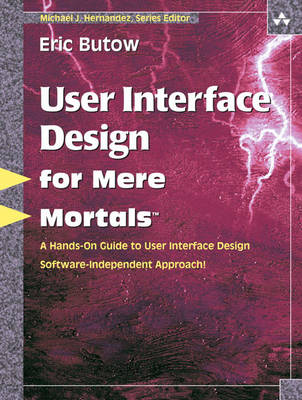 User Interface Design for Mere Mortals takes the mystery out of designing effective interfaces for both desktop and web applications. It is recommended reading for anyone who wants to provide users of their software with interfaces that are intuitive and easy-to-use. The key to any successful application lies in providing an interface users not only enjoy interacting with but which also saves time, eliminates frustration, and gets the job done with a minimum of effort. Readers will discover the secrets of good interface design by learning how users behave and the expectations that users have of different types of interfaces.

* Gaining invaluable insights into how users behave, including the seven stages of human interaction with computers

* Working through case study based, in-depth analysis of each of the stages involved in designing a user interface

* Learning how to define, conduct, and analyze usability testing

» Have you read this book? We'd like to know what you think about it - write a review about User Interface Design for Mere Mortals (TM) book by Eric Butow and you'll earn 50c in Boomerang Bucks loyalty dollars (you must be a Boomerang Books Account Holder - it's free to sign up and there are great benefits!)

Eric Butow is the CEO of Butow Communications Group (BCG), a technical writing and Web design firm based in Roseville, California. Eric has authored or coauthored eight books since 2000, including Master Visually Windows 2000 Server, Teach Yourself Visually Windows 2000 Server, FrontPage 2002 Weekend Crash Course, C#:Your Visual Blueprint,Creating Web Pages Bible,Dreamweaver MX 2004 Savvy,The PDF Book for Microsoft Office,and Special Edition Using Microsoft Windows Vista. Eric has also been a technical editor for various computing books and has written articles for international publications including SD Times and Intercom, the magazine of the Society for Technical Communication. Eric is also an online course developer and instructor. He has developed two Windows XP networking courses--one for Windows XP Home Edition users and the other for Windows XP Professional users--for Ed2Go. Eric has also developed RoboHelp and Windows Vista multimedia courses for Virtual Training Company (VTC). In addition, he is a course developer and instructor for the California State University, Sacramento College of Continuing Education Technical Writing Certificate Program. When Eric isn't busy writing, teaching, or running his own business, you'll find him reading, hanging out with friends (usually at the nearest Starbucks or bookstore), or enjoying the company of his family at his parents' home in the Sierra foothills or the family vineyard in northern California.

A Preview for this title is currently not available.
More Books By Eric Butow
View All