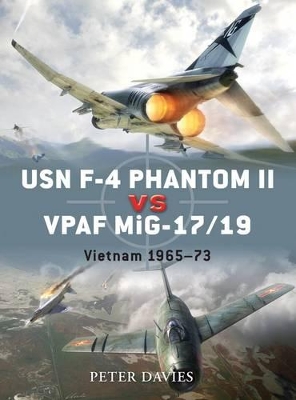 The Vietnam War placed unexpected demands upon American military forces and equipment.The principal US naval fighter, the McDonnell F-4 Phantom, had originally been designed to defend the Fleet from air attack at long range. However, its tremendous power and bomb-carrying capacity made it an obvious candidate for the attack mission in Vietnam from 1965 onwards. Its opponent was the MiG-17, a direct descendant of the MiG-15, which had given USAF Sabre jets a hard fight in the Korean War. This book brings to life their dangerous duels and includes detailed cockpit views and other specially commissioned artwork to highlight the benefits and shortcomings of each plane type. It was in the skies over Vietnam that many of the techniques of air combat evolved as pilots learned how to use and to defeat supersonic fighters for the first time.

» Have you read this book? We'd like to know what you think about it - write a review about USN F-4 Phantom II Vs Vpaf Mig-17 book by Jim Laurier and you'll earn 50c in Boomerang Bucks loyalty dollars (you must be a Boomerang Books Account Holder - it's free to sign up and there are great benefits!)

Peter Davies is based in Bristol and has written or co-written 16 books on modern American combat aircraft, including four previous Osprey titles and the standard reference work on US Navy and Marine Corps Phantom II operations, Gray Ghosts. The author lives in Bristol, England.