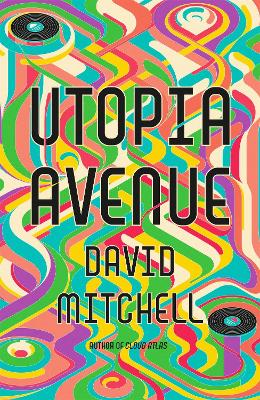 'A stand-out triumph' - The Sunday TimesThe spectacular new novel from the bestselling author of CLOUD ATLAS and THE BONE CLOCKS, 'one of the most brilliantly inventive writers of this, or any country' (Independent).Utopia Avenue might be the most curious British band you've never heard of.Emerging from London's psychedelic scene in 1967, folksinger Elf Holloway, blues bassist Dean Moss, guitar virtuoso Jasper de Zoet and jazz drummer Griff Griffin together created a unique sound, with lyrics that captured their turbulent lives and times. The band produced only two albums in two years, yet their musical legacy lives on.This is the story of the band's brief, blazing journey from Soho clubs and draughty ballrooms to the promised land of America, just when the Summer of Love was receding into something much darker - a multi-faceted tale of dreams, drugs, love, sexuality, madness and grief; of stardom's wobbly ladder and fame's Faustian pact; and of the collision between youthful idealism and jaded reality as the Sixties drew to a close.Above all, this bewitching novel celebrates the power of music to connect across divides, define an era and thrill the soul.David Mitchell's seven novels include Cloud Atlas and The Bone Clocks. He has been shortlisted twice for the Booker Prize and lives in Ireland.

Other Editions - Utopia Avenue: The Number One Sunday Times Bestseller by David Mitchell » Have you read this book? We'd like to know what you think about it - write a review about Utopia Avenue: The Number One Sunday Times Bestseller book by David Mitchell and you'll earn 50c in Boomerang Bucks loyalty dollars (you must be a Boomerang Books Account Holder - it's free to sign up and there are great benefits!)

5 stars Utopia Avenue is the seventh novel by award-winning British author, David Mitchell. In early 1967, due to a pickpocket, bass guitarist Dean Moss finds himself, in quick succession, homeless, jobless, almost penniless and still owing the final payment on his guitar. Levon Frankland appears at the critical moment with a proposal, and shortly thereafter, Dean’s on stage at the 2i’s club, playing with a dazzling lead guitarist and a talented drummer. Frankland has big plans for them.

Not much later, Jasper de Zoet, Peter “Griff” Griffin and Dean are listening, spellbound, as Elf Holloway, the remaining (and better) half of the Fletcher and Holloway duo, sings her compositions solo. It’s these four that will comprise the band soon to be known as Utopia Avenue, which Frankland hopes to promote to fame and fortune.

It takes a year of hard slog, practice and travelling to gigs, not all of which are well-received, before they have a single and an album on the market. This eclectic mix of singer/songwriters, each with established roots in distinctly different genres, produces a unique sound. Elf has proven her popularity in folk; Griff drums jazz; Dean’s style is blues; and Jasper’s, acid rock; music critics struggle to classify them, but the public likes what it hears.

If Dean comes across as an angry young man with father issues, Elf’s background epitomises family support, while Griff’s anarchic persona belies a loving family; Levon tries to stay under the homophobic radar that typifies the times.

Jasper is different: a youth spent commuting across the channel between his maternal English and paternal Dutch families, he describes himself as emotionally dyslexic, and that’s not all that’s going on in his head. A problem that has plagued Jasper since he was fifteen seems to be re-emerging and the band’s visit to Amsterdam allows him to seek help…

Three main narratives, with some flashbacks, trace the band’s trajectory from inception to (relatively short-lived) fame and the aftermath, detailing incidents and life events that inspire the songs on their three albums. The chapters are headed for the LP track titles, with the narrative perspective denoted as the artist’s credit, in parentheses.

This is not a quick read, but it’s hard not to invest in these characters and worry about their fate and feel indignant at what befalls them: love and loss, grief and guilt, plagiarism, blackmail and false imprisonment. Mitchell easily evokes the era, with plenty of star cameos dotting a soup thick with sixties names, drug use, free love, and song titles that are bound to cause earworms (some quite annoying).

While this novel can probably be read as a stand-alone, and will appeal especially to readers of a certain vintage, having read Mitchell’s previous works will certainly enhance the reader’s enjoyment, as there are quite a lot of references (characters, events, objects) to earlier works: Mitchell fans are more likely to “get it”. There are also significant spoilers for The Thousand Autumns of Jacob de Zoet. Another excellent dose of David Mitchell magic.

The Ballad of Songbirds and Snakes
Suzanne Collins
$26.99 $29.99
More Books By David Mitchell
View All

A Select Number of Spiritual Hymns, Taken from the Most Strong, Plain, and Suitable Texts in the Old and New Testament. Having the General Scope, or Meaning at the Beginning of Each Hymn. to Which Is Added, St. Augustin's Hymn.
$54.55 $60.61