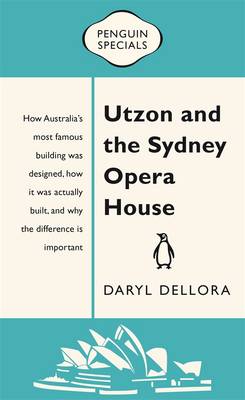 Jorn Utzon designed the Sydney Opera House so that every element would be in harmony. But its construction, while it began in just that way, ended in complete discord. The visionary state government that commissioned the project was replaced by one that did not appreciate it and stopped funding it. Utzon was forced out. The interiors he planned went unbuilt and rumours were spread about his departure. In this incisive essay, to celebrate the Opera House's fortieth anniversary, Daryl Dellora draws on his own past interview with Utzon to pull those rumours apart. Along with the architect's original intentions, he reveals how misguided was the attempt to thwart one of the modern world's architectural masterpieces.

» Have you read this book? We'd like to know what you think about it - write a review about Utzon And The Sydney Opera House: Penguin Special book by Daryl Dellora and you'll earn 50c in Boomerang Bucks loyalty dollars (you must be a Boomerang Books Account Holder - it's free to sign up and there are great benefits!)

Daryl Dellora is an award-winning documentary filmmaker. He is the recipient of an Australian Human Rights Award for his film Mr Neal is Entitled to be an Agitator, about the life of High Court justice Lionel Murphy, and a Gold Plaque at the Chicago International Television Festival for The Edge of the Possible - a film about Sydney Opera House architect Jorn Utzon. Daryl has been an Australian Film Commission documentary fellow, and in 2005 was awarded a residency at the Rockefeller Foundation Bellagio Study Centre. He wrote and directed the film Michael Kirby- Don't forget the justice bit (2010) for ABC-TV, has made films about the Governor-General of Australia and the High Court, and has worked for Film Australia and SBS-TV. Daryl co-produced the 2006 feature film Hunt Angels (winner of the AFI Award for Best Documentary) and was an executive producer of Celebrity- Dominick Dunne (2008). He is a director of the film production company Film Art Doco and filmartmedia.com, and lives in Melbourne. Michael Kirby- Law, Love and Life is his first book.

A Preview for this title is currently not available.
More Books By Daryl Dellora
View All