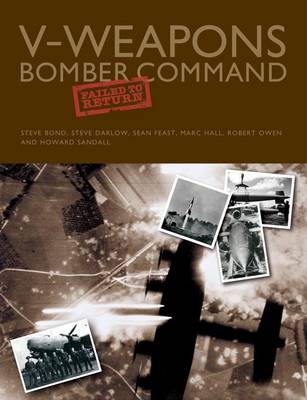 In the summer of 1944 Nazi Germany launched its terrifying Vergeltungswaffen (reprisal weapon) attack against the population of south-east England. Under direct attack the Allies responded. The Supreme Allied Commander General Dwight D. Eisenhower was quite clear that the V-weapon counter measures were of paramount importance over everything except the urgent requirements of the D-Day and Normandy land battle, 'this priority to obtain until we can be certain that we have definitely gotten the upper hand of this particular business.' He would use all the resources at his disposal including the Royal Air Force's heavy bomber force. The task for RAF Bomber Command was simple. If the bomber crews could reduce the number of V1s launched, the fighter aircraft and gun defences had a better chance to intercept and shoot down the flying bombs. But these pilotless aircraft were not the only menace, the V2 rocket offensive would soon be launched, and the Allies closely monitored the construction of what they came to learn was the V3 'supergun' site. When the war came to a close Bomber Command could justifiably claim success against the V-Weapons. There was a cost though - a cost in aircrew lives. V-Weapons Bomber Command Failed to Return tells the story of some of those airmen who were prepared to risk their lives countering the German V-Weapon offensive in direct defence of the civilian population. They had responded to what British Prime Minister Winston Churchill described as the attempt to 'blast the viper in his nest'. Their story deserves to be told. 'We Will Remember Them'. 120 illustrations

» Have you read this book? We'd like to know what you think about it - write a review about V-Weapons Bomber Command Failed to Return book by Howard Sandall and you'll earn 50c in Boomerang Bucks loyalty dollars (you must be a Boomerang Books Account Holder - it's free to sign up and there are great benefits!)

Howard Sandall is the No. 622 Squadron historian, the author of the squadron's history We Wage War By Night and contributor to D-Day Bomber Command Failed to Return. His research into his uncle's time with Bomber Command has led to him expanding his interest to other squadrons with the aim of perpetuating memories for future generations. Sean Feast started a career in journalism in 1985, concurrently training at the London College of Printing and later joining Maxwell Business Communications. In 1991 he joined the then fledgling advertising agency, AGA, to start its PR business, AGA Public Relations, later becoming its Managing Partner. The business re-branded to become Gravity in 2011. He has won several prestigious industry awards, notably in the area of crisis management across a diverse range of industries from aerospace to debt collection. As an author he has written or co-written more than a dozen books, including seven titles with Grub Street: Heroic Endeavour; Master Bombers; A Pathfinder's War (with Ted Stocker); Churchill's Navigator (with John Mitchell); The Pathfinder Companion; The Last of the 39-ers; and now The Alien Sky (with Andy Wiseman). He is also a regular contributor to a variety of aviation magazines, especially FlyPast and Aeroplane Monthly. Away from writing he is a qualified football referee and official mentor attached to the Herts FA. He is married with two teenage boys and lives in Sarratt, Hertfordshire.

A Preview for this title is currently not available.
More Books By Howard Sandall
View All