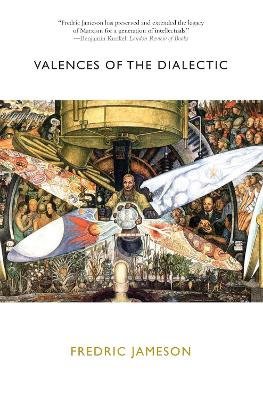 Valences of the Dialectic

Description - Valences of the Dialectic by Fredric Jameson

After half a century exploring dialectical thought, renowned cultural critic Fredric Jameson presents a comprehensive study of a misunderstood yet vital strain in Western philosophy. The dialectic, the concept of the evolution of an idea through conflicts arising from its inherent contradictions, transformed two centuries of Western philosophy. To Hegel, who dominated nineteenthcentury thought, it was a metaphysical system. In the works of Marx, the dialectic became a tool for materialist historical analysis. Jameson brings a theoretical scrutiny to bear on the questions that have arisen in the history of this philosophical tradition, contextualizing the debate in terms of commodification and globalization, and with reference to thinkers such as Rousseau, Lukacs, Heidegger, Sartre, Derrida, and Althusser. Through rigorous, erudite examination, Valences of the Dialectic charts a movement toward the innovation of a spatialA" dialectic. Jameson presents a new synthesis of thought that revitalizes dialectical thinking for the twenty-first century.

Book Reviews - Valences of the Dialectic by Fredric Jameson

» Have you read this book? We'd like to know what you think about it - write a review about Valences of the Dialectic book by Fredric Jameson and you'll earn 50c in Boomerang Bucks loyalty dollars (you must be a Boomerang Books Account Holder - it's free to sign up and there are great benefits!)

FREDRIC JAMESON is the Distinguished Professor of Comparative Literature at Duke University. He is the author of many books, including Postmodernism, Brecht and Method, Late Marxism, The Cultural Turn, A Singular Modernity, The Modernist Papers, Archaeologies of the Future, and The Ideologies of Theory. He was a recipient of the 2008 Holberg International Memorial Prize.

A Preview for this title is currently not available.
More Books By Fredric Jameson
View All