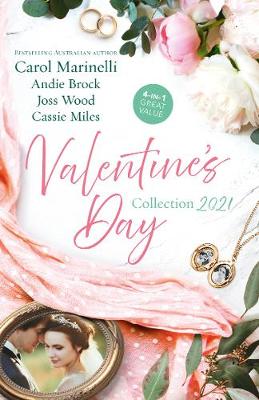 As Head of PR for the elite Hollywood Hills Clinic, ex-socialite Freya Rothsberg knows image is everything. Yet her own facade of calm control is shattered when she meets outrageously sexy heart surgeon Zack Carlton at a wedding. One wild night of passion later, Freya is shocked to realise that Zack is the clinic's newest recruit!

Playboy Zack exposes Freya's every secret yearning for a fairytale ending. He's an expert with damaged hearts - does she dare trust him with hers?

Daredevil Rafael Revaldi has always lived for the moment. But having cheated death, the Conte di Monterrato is focused on the future. He needs an heir, but to get one he'll face his toughest challenge yet - winning back his estranged wife!

Lottie returns to the castle she once called home with newfound strength. The intense sensual connection between Lottie and Rafe remains, but so do the emotional scars of their marriage. Can Lottie risk her heart again to give them the child they both so desperately want?

PR whiz Cady Collins' personal and professional lives both desperately need a reboot. So when millionaire Beckett Ballantyne decides to rebrand his company, Cady is determined to land the job. The only complication is her romantic history with her devilishly handsome boss, whose smouldering blue-eyed gaze still makes her swoon. And the only complication with that, is the fact she's already pregnant!

Beck doesn't mind that he's not the baby's father - he only knows he burns for the mum-to-be. But when a media misunderstanding leads to a fake engagement, will Beck end the Valentine's Day charade, or play for keeps?

Rescuing a beautiful woman from four armed men wasn't how Blake Randall planned to spend his Army leave. But as chief security detail at his best friend's wedding, the ranger's mission is just beginning. A blizzard has cut off Sarah Bentley's Colorado B&B from the outside world, trapping them with a killer. Blake will keep the spirited innkeeper safe - whether she wants his protection or not.

Snowed in with the rugged stranger who already saved her life once, Sarah has no choice but to trust Blake. As passion ignites, she realises he's so much more than a strong shoulder to lean on. With the danger escalating, it's time to listen to what her heart's telling her: With Blake by her side, they can survive anything...

» Have you read this book? We'd like to know what you think about it - write a review about Valentine's Day Collection 2021/Seduced by the Heart Surgeon/The Last Heir of Monterrato/Reunited...and Pregnant/Snowed In book by Andie Brock and you'll earn 50c in Boomerang Bucks loyalty dollars (you must be a Boomerang Books Account Holder - it's free to sign up and there are great benefits!)


A Preview for this title is currently not available.
More Books By Andie Brock
View All

Greek Mavericks: For The Greek's Revenge/The Consequence of His Vengeance/The Greek's Pleasurable Revenge/Taken by Her Greek Boss
$17.09 $18.99