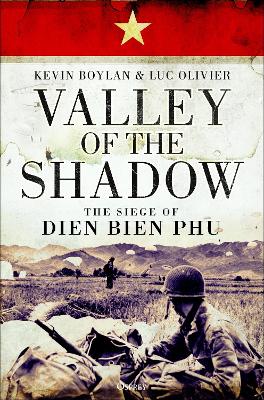 Valley of the Shadow

The Siege of Dien Bien Phu

Description - Valley of the Shadow by Mr Kevin Boylan

Struggling to reassert control over their Indochinese colonies after World War II, the French established a huge air-land base in the valley of Dien Bien Phu. But when the opposing Vietnamese People's Army (VPA) began massing its forces against the base in late 1953, French commanders seized the opportunity to draw their elusive enemy into a decisive set-piece battle.
Defending a series of fortified positions which were reliant upon a single airstrip - and later, risky and inaccurate airdrops - for reinforcement and resupply, the French troops quickly discovered that they had underestimated their enemy. In 56 days of costly close-quarters fighting, the VPA slowly dislodged the French from one strongpoint after another by developing novel tactics and accomplishing incredible feats of engineering.
Drawing upon Vietnamese-language sources never previously employed in Western accounts of the siege, Valley of the Shadow is a dramatic re-telling of the climactic battle of the First Indochina War, the conflict that saw the French expelled from their former colony and set the stage for the "American War" in Vietnam.

Book Reviews - Valley of the Shadow by Mr Kevin Boylan

» Have you read this book? We'd like to know what you think about it - write a review about Valley of the Shadow book by Mr Kevin Boylan and you'll earn 50c in Boomerang Bucks loyalty dollars (you must be a Boomerang Books Account Holder - it's free to sign up and there are great benefits!)

Kevin Boylan teaches history at Emmanuel College in Boston, Massachusetts. He earned his BA in History from Rutgers University, and his PhD from Temple University. From 1995 to 2005, he was employed by the Pentagon as a defense analyst for the US Defense Department and the US Army Staff. Dr Boylan returned to academe in 2005, teaching first at the University of Maine, Augusta, and then at a variety of colleges and universities in Connecticut and Wisconsin before moving to Boston. In October 2014, his ground-breaking article on the topic of Viet Minh artillery at Dien Bien Phu was published in the Journal of Military History, and won the Society of Military History's Moncado Prize in 2015. He lives in Medford, MA, USA. Luc Olivier earned his Masters in Geography at the CESA in the University of Tours, and served in the French Army as a second lieutenant and platoon commander. He also has an extensive background in IT consulting and is presently the managing director of a French-Hungarian IT company. He has designed a dozen commercial wargames - including two on Dien Bien Phu - which have been published in magazines including Vae Victis and Battles Magazine. He also written and published many articles on historical military topics over the last 20 years. He lives in Paris, France.