Knut Wicksell is acknowledged to be the precursor and prophet of modern macroeconomic theory and he provided some of its chief elements a generation before their power and significance were properly recognized. This book, originally published in German in 1893 and in English in 1954 brought time into the previously timeless theory of value and income distribution. The theory of the real interest rate, which he developed in Value, Capital and Rent became a central and essential element when he began to explain what determines the general level of money prices and how the changes of this level come about.

Other Editions - Value, Capital and Rent by Knut Wicksell 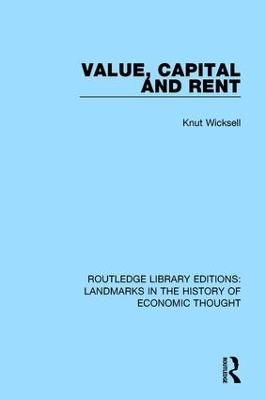 » Have you read this book? We'd like to know what you think about it - write a review about Value, Capital and Rent book by Knut Wicksell and you'll earn 50c in Boomerang Bucks loyalty dollars (you must be a Boomerang Books Account Holder - it's free to sign up and there are great benefits!)