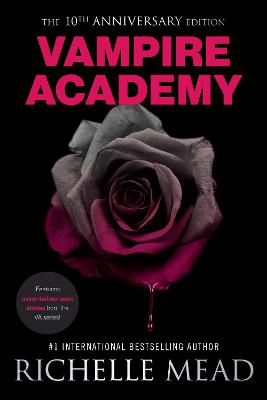 Richelle Mead celebrates 10 years of Vampire Academy with an exclusive, never-before-seen collection of stories that sheds new light on the world and its players-
The Turn and the Flame takes a deeper look into the dark stain on the Ozera dynasty...
Hello My Name is Rose Hathaway tracks the shenanigans that ensue when Rose and Dimitri become unlikely teammates in a high-stakes scavenger hunt...
The Meeting gives us a glimpse of Rose Hathaway through Dimitri's eyes...
From the Journal of Vasilisa Dragomir unearths the princess's private thoughts from a transformative period of her life...

St. Vladimir's Academy isn't just any boarding school--it's a hidden place where vampires are educated in the ways of magic and half-human teens train to protect them. Rose Hathaway is a Dhampir, a bodyguard for her best friend Lissa, a Moroi Vampire Princess. They've been on the run, but now they're being dragged back to
St. Vladimir's--the very place where they're most in danger. . . .
Rose and Lissa become enmeshed in forbidden romance, the Academy's ruthless social scene, and unspeakable nighttime rituals. But they must be careful lest the Strigoi--the world's fiercest and most dangerous vampires--make Lissa one of them forever.

» Have you read this book? We'd like to know what you think about it - write a review about Vampire Academy 10th Anniversary Edition book by Richelle Mead and you'll earn 50c in Boomerang Bucks loyalty dollars (you must be a Boomerang Books Account Holder - it's free to sign up and there are great benefits!)

Richelle Mead is the author of the international #1 bestselling Vampire Academy series, its bestselling spinoff series Bloodlines, the fantasy standalone Soundless, and The Glittering Court. A lifelong reader, Richelle has always had a particular fascination with mythology and folklore. When she can actually tear herself away from books (either reading or writing them), she enjoys bad reality TV, traveling, trying interesting cocktails, and shopping for dresses to wear on tour. She is a self-professed coffee addict, works in her pajamas, and has a passion for all things wacky and humorous. Originally from Michigan, Richelle now lives in Seattle, Washington, where she is hard at work on her next novel. Visit www.RichelleMead.com to find out more.

The Relic of the Blue Dragon: Children of the Dragon 1
Rebecca Lim
$11.99 $14.99
More Books By Richelle Mead
View All