Vanishing Matter and the Laws of Motion

Description - Vanishing Matter and the Laws of Motion by Peter Anstey

This volume explores the themes of vanishing matter, matter and the laws of nature, the qualities of matter, and the diversity of the debates about matter in the early modern period. Chapters are unified by a number of interlocking themes which together enable some of the broader contours of the philosophy of matter to be charted in new ways. Part I concerns Cartesian Matter; Part II covers Matter, Mechanism and Medicine; Part III covers Matter and the Laws of Motion; and Part IV covers Leibniz and Hume. Bringing together some of the world's leading scholars of early modern philosophy, as well as some exciting new researchers, Vanishing Matter and the Laws of Motion stakes out new territory that all serious scholars of early modern philosophy and science will want to traverse. 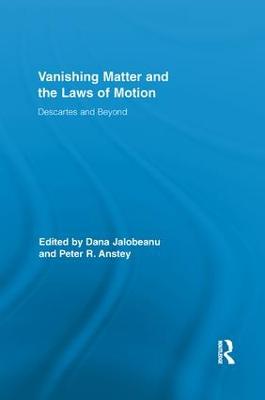 » Have you read this book? We'd like to know what you think about it - write a review about Vanishing Matter and the Laws of Motion book by Peter Anstey and you'll earn 50c in Boomerang Bucks loyalty dollars (you must be a Boomerang Books Account Holder - it's free to sign up and there are great benefits!)

Dana Jalobeanu is Lecturer in Philosophy and program director at the research center Foundations of Early Modernity at the University of Bucharest. Her current research focuses on the emergence of early modern experimental philosophy, with a special interest in the writings of Francis Bacon and their reception. She is the author of The Invention of Modernity: Natural Philosophy and Theology in the Seventeenth Century (in Romanian), Cluj: Napoca Star, 2006. Peter R. Anstey is the inaugural Professor of Early Modern Philosophy in the Department of Philosophy at the University of Otago. His research focuses on early modern philosophy with special reference to the writings of John Locke and Robert Boyle. He is the author of The Philosophy of Robert Boyle, London: Routledge, 2000.

A Preview for this title is currently not available.
More Books By Peter Anstey
View All

The Idea of Principles in Early Modern Thought: Interdisciplinary Perspectives
$77.21 $77.99

Oxford Handbook of British Philosophy in the Seventeenth Century
$204.26 $226.95