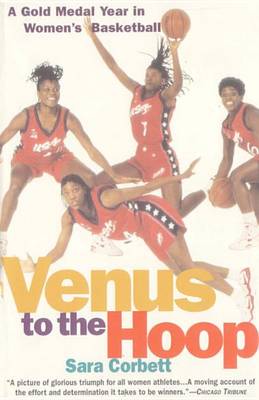 Venus to the Hoop: a Gold Medal Year in Women's Basketball

Description - Venus to the Hoop: a Gold Medal Year in Women's Basketball by Sara Corbett

In the spring of 1995, twelve extraordinary basketball players were chosen to represent the United States in the year-long march to the 1996 Olympics. For Rebecca Lobo, Sheryl Swoopes, Lisa Leslie, and their teammates, winning the gold medal was only one of many goals. Around them swirled the dreams of the millions of young girls who played organized basketball, the hopes of the fans who sent the team an average of 125 pounds of fan mail each month, the multimillion-dollar bets of Nike, Champion, and other corporate sponsors, the promise of a new women's professional league, and not least, the hopes of female athletes across the country to gain the respect accorded male athletes.

These women upon whom so much pressure rested included a runway model (who also happened to be one of the few women players able to dunk), a forward who barely survived a car accident that left her in coma, a collegiate sensation struggling to live up to her rep and her huge marketing contract from Reebok, a superstar known as "the female Michael Jordan," and a controversial, unrelenting coach. Nine of the women were black; three were white. Some were married, some single; some outspoken, some painfully shy. Some were rivals, some fast friends. How they came together, both on and off the court, is the subject of this wonderful celebration of the female athlete.

Book Reviews - Venus to the Hoop: a Gold Medal Year in Women's Basketball by Sara Corbett

» Have you read this book? We'd like to know what you think about it - write a review about Venus to the Hoop: a Gold Medal Year in Women's Basketball book by Sara Corbett and you'll earn 50c in Boomerang Bucks loyalty dollars (you must be a Boomerang Books Account Holder - it's free to sign up and there are great benefits!)

Sara Corbett is a journalist whose articles have appeared in National Geographic, Esquire, and O, The Oprah Magazine. A contributing writer at the New York Times Magazine, she is the author of Venus to the Hoop and coauthor of A House in the Sky with Amanda Lindhout.

A Preview for this title is currently not available.
More Books By Sara Corbett
View All