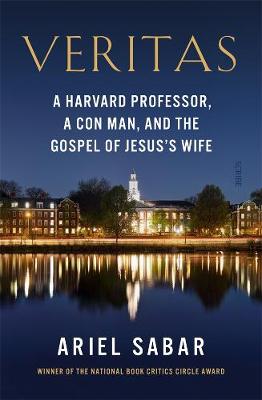 Veritas: A Harvard professor, a con man, and the Gospel of Jesus's Wife

Description - Veritas: A Harvard professor, a con man, and the Gospel of Jesus's Wife by Ariel Sabar

In 2012, Dr Karen King, a star professor at Harvard Divinity School, announced a blockbuster discovery at a scholarly conference just steps from the Vatican- she had found an ancient fragment of papyrus in which Jesus calls Mary Magdalene 'my wife'. The tattered manuscript made international headlines. If early Christians believed Jesus was married, it would upend the 2,000-year history of the world's predominant faith, threatening not just the celibate, all-male priesthood but sacred teachings on marriage, sex, and women's leadership. Biblical scholars were in an uproar, but King had impeccable credentials as a world-renowned authority on female figures in the lost Christian texts from Egypt known as the Gnostic gospels. 'The Gospel of Jesus's Wife' - as she provocatively titled her discovery - was both a crowning career achievement and powerful proof for her arguments that Christianity from its start embraced alternative, and far more inclusive, voices.

As debates over the manuscript's authenticity raged, award-winning journalist Ariel Sabar set out to investigate a baffling mystery- where did this tiny scrap of papyrus come from? His search for answers is an international detective story - leading from the factory districts of Berlin to the former headquarters of the East German Stasi, before winding up in rural Florida, where he discovered an internet pornographer with a prophetess wife, a fascination with the Pharaohs, and a tortured relationship with the Catholic Church.

Veritas is a tale of fierce intellectual rivalries at the highest levels of academia, a piercing psychological portrait of a disillusioned college dropout whose life had reached a breaking point, and a tragedy about a brilliant scholar handed an ancient papyrus that appealed to her greatest hopes for Christianity - but forced a reckoning with fundamental questions about the nature of truth and the line between faith and reason.

'Mesmerising ... Sabar has our attention, and slowly, remorselessly, he pays out the rest of his devilish yarn ... Savour the denouement - and don't leave at intermission.'
-Alex Beam, Wall Street Journal

'Intriguing religious/true-crime story involving a possible wife of Jesus ... A lengthy yet fascinating tale of how one scholar was duped, both by a con man and by herself.'
-Kirkus Reviews

' A madcap, unforgettable book ... For enthusiasts of ancient Christianity ... and readers of idea-driven capers, whether by Daniel Silva or Janet Malcolm. It's a barely believable tale, crazier than a tweed-sniffer in the faculty lounge.'
-Mark Oppenheimer, New York Times Book Review

Book Reviews - Veritas: A Harvard professor, a con man, and the Gospel of Jesus's Wife by Ariel Sabar

» Have you read this book? We'd like to know what you think about it - write a review about Veritas: A Harvard professor, a con man, and the Gospel of Jesus's Wife book by Ariel Sabar and you'll earn 50c in Boomerang Bucks loyalty dollars (you must be a Boomerang Books Account Holder - it's free to sign up and there are great benefits!)


A Preview for this title is currently not available.
More Books By Ariel Sabar
View All