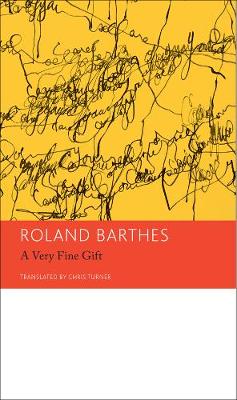 A Very Fine Gift and Other Writings on Theory

Roland Barthes, whose centenary falls in 2015, was a restless, protean thinker. A constant innovator, often as a daring smuggler of ideas from one discipline to another, he first gained an audience with his pithy essays on mass culture and then went on to produce some of the most suggestive and stimulating cultural criticism of the late twentieth century, including Empire of Signs, The Pleasure of the Text, and Camera Lucida. In 1976, this one time structuralist outsider was elected to a chair at France's preeminent College de France, where he chose to style himself as professor of literary semiology until his death in 1980.

The greater part of Barthes's published writings have been available to a French audience since 2002, but here, translator Chris Turner presents a collection of essays, interviews, prefaces, book reviews, and other journalistic material for the first time in English. Divided into five themed volumes, readers are presented in volume one, 'A Very Fine Gift' and Other Writings on Theory, with Barthes's attempts to frame his lifelong curiosities in theoretical form, from his early musings on the sociology of literature through his high period of structuralism to his later reflections on Derrida.

Buy A Very Fine Gift and Other Writings on Theory by Roland Barthes from Australia's Online Independent Bookstore, Boomerang Books.

» Have you read this book? We'd like to know what you think about it - write a review about Very Fine Gift and Other Writings on Theory book by Roland Barthes and you'll earn 50c in Boomerang Bucks loyalty dollars (you must be a Boomerang Books Account Holder - it's free to sign up and there are great benefits!)

Roland Barthes (1915-80) was a professor at the College de France until his death. His books include Camera Lucida: Reflections on Photography; Image, Music, Text; and A Lover's Discourse: Fragments. Chris Turner is a writer and translator who lives in Birmingham, England. He has translated Jean-Paul Sartre's The Aftermath of War, Portraits, and Critical Essays and Andre Gorz's Ecologica and The Immaterial, all published by Seagull Books.

A Preview for this title is currently not available.
More Books By Roland Barthes
View All

How to Live Together: Novelistic Simulations of Some Everyday Spaces
$48.95 $49.95