P.G. Wodehouse is recognised as the greatest English comic writer of the twentieth century. His characters and settings have entered our language and our mythology. Launched on the twenty-fifth anniversary of his death, the Everyman Wodehouse will eventually contain all the novels and stories, edited and reset. Each Everyman volume will be the finest edition of the master ever published.

Very Good Jeeves! (1930) is a collection of eleven short stories starring Bertie Wooster in eleven alarming predicaments from which he has to be rescued by his peerless gentleman's gentleman. Whether Bertie is tangling with a red-headed ball of fire such as Roberta Wickham, dealing with an irate headmistress, placating a rampaging aunt, puncturing the wrong hot water bottle, singing 'Sonny Boy', or simply trying to concentrate on his golf handicap, Jeeves is always there to help - though rarely in ways which his employer expects. These brilliantly plotted stories give the essence of Wodehousian comedy. 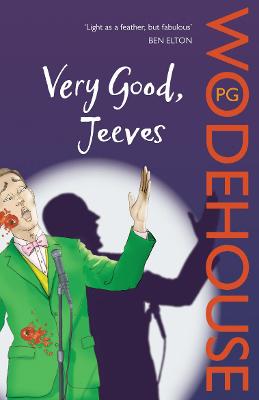 » Have you read this book? We'd like to know what you think about it - write a review about Very Good, Jeeves! book by P.G. Wodehouse and you'll earn 50c in Boomerang Bucks loyalty dollars (you must be a Boomerang Books Account Holder - it's free to sign up and there are great benefits!)


A Preview for this title is currently not available.
More Books By P.G. Wodehouse
View All