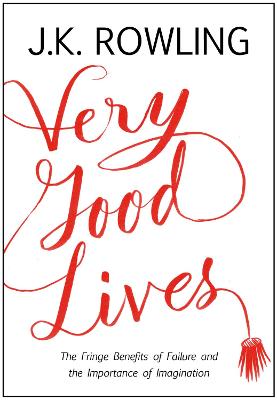 The Fringe Benefits of Failure and the Importance of Imagination

In 2008, J.K. Rowling delivered a deeply affecting commencement speech at Harvard University. Now published for the first time in book form, VERY GOOD LIVES offers J.K. Rowling's words of wisdom for anyone at a turning point in life, asking the profound and provocative questions: How can we embrace failure? And how can we use our imagination to better both ourselves and others? Drawing from stories of her own post-graduate years, the world-famous author addresses some of life's most important issues with acuity and emotional force. Sales of VERY GOOD LIVES will benefit Lumos, a charity organisation founded by J.K. Rowling, which works to transform the lives of disadvantaged children, and university-wide financial aid at Harvard University.

» Have you read this book? We'd like to know what you think about it - write a review about Very Good Lives book by J.K. Rowling and you'll earn 50c in Boomerang Bucks loyalty dollars (you must be a Boomerang Books Account Holder - it's free to sign up and there are great benefits!)

J.K. Rowling is the author of the bestselling Harry Potter series of seven books, published between 1997 and 2007, which have sold over 450 million copies worldwide, are distributed in more than 200 territories, are translated into 77 languages, and have been turned into eight blockbuster films. She has also written two small volumes, which appear as the titles of Harry's schoolbooks within the novels: Fantastic Beasts and Where to Find Them and Quidditch Through the Ages were published by Bloomsbury Children's Books in March 2001 in aid of Comic Relief. In December 2008, The Tales of Beedle the Bard was published in aid of the Children's High Level Group (now known as Lumos) and quickly became the fastest-selling book of the year. Her first novel for adult readers, The Casual Vacancy, was published in September 2012 and her first two crime novels, written under the pseudonym Robert Galbraith, were published in 2013 and 2014 respectively. As well as an OBE for services to children's literature, J.K. Rowling is the recipient of numerous awards and honorary degrees, including the Prince of Asturias Award for Concord, France's Legion d'Honneur, and the Hans Christian Andersen Award. She supports a wide number of charitable causes through her charitable trust Volant, as well as being the founder and President of the children's charity, Lumos, which works to end the institutionalisation of children globally and ensure all children grow up in a safe and caring environment.