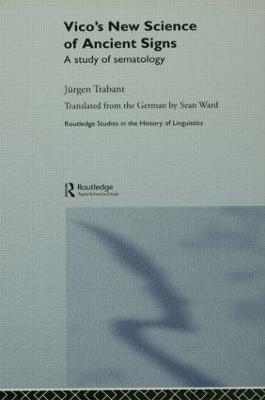 The Italian philosopher Vico is primarily known as a philospher of history. But his main intention was the foundation of 'science', true and secure knowledge, in the tradition of Bacon and Descartes. Contrary to both, Vico bases 'science' on the 'political world', on society and culture, instead of on nature or pure reason. The political world is mainly a world of signs and languages, and knowledge is always mediated through signs and languages. Hence, Vico's philosophy is a linguistic (or sematological) turn of philosophy - the first linguistic turn in the history of philosophy. This book reads Vico's fascinating New Science as a landmark in language (and sign) philosophy. Vico's sematology and his theory of signs ( semata in Greek) contains important insights into the function of signs and language for human thought, the relation between images and language, gestures and language and memory and language. These ideas are discussed within the framework of eighteenth-century philosophy and with constant attention to contemporary linguistic and philosophical discussion.
Vico's New Science of Ancient Signs will be essential reading for advanced students and academics within the fields of linguistics and philosophy. 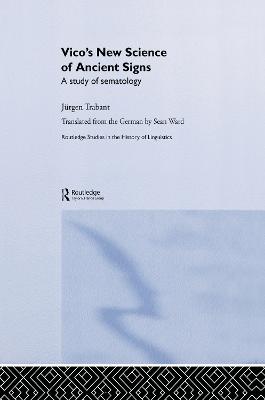 » Have you read this book? We'd like to know what you think about it - write a review about Vico's New Science of Ancient Signs book by Jurgen Trabant and you'll earn 50c in Boomerang Bucks loyalty dollars (you must be a Boomerang Books Account Holder - it's free to sign up and there are great benefits!)

Jurgen Trabant is professor of French and Italian linguistics at the Free University Berlin. His main fields of research are the history of linguistics and language philosophy, semiotics, especially semiotics of literature and language politics. Sean Ward is a writer and translator. He lives in Arlington, Virginia and is co-editor, with Jurgen Trabant, of New Essays on the Origin of Language (2001).

A Preview for this title is currently not available.
More Books By Jurgen Trabant
View All