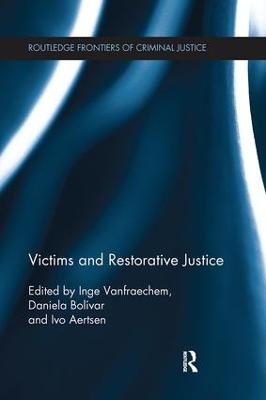 Restorative justice aims to address the consequences of crime by encouraging victims and offenders to communicate and discuss the harm caused by the crime that has been committed. In the majority of cases, restorative justice is facilitated by direct and indirect dialogue between victims and offenders, but it also includes support networks and sometimes involves professionals such as police, lawyers, social workers or prosecutors and judges.

Using a combination of victimological literature and empirical data from a European research project, this book considers the role and the position of the victim in restorative justice practices, focusing on legislative, organisational and institutional frameworks of victim-offender mediation and conferencing programmes at a national and local level, as well as the victims' personal needs and experiences. The findings are essential reading for academics and students engaged in the study of justice, victimology and law. The publication will also be valuable to policymakers and professionals such as social workers, lawyers and mediators.

Other Editions - Victims and Restorative Justice by Inge Vanfraechem » Have you read this book? We'd like to know what you think about it - write a review about Victims and Restorative Justice book by Inge Vanfraechem and you'll earn 50c in Boomerang Bucks loyalty dollars (you must be a Boomerang Books Account Holder - it's free to sign up and there are great benefits!)

A Preview for this title is currently not available.
More Books By Inge Vanfraechem
View All