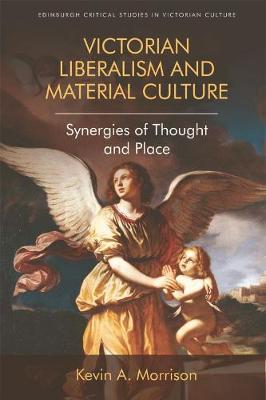 Synergies of Thought and Place

Description - Victorian Liberalism and Material Culture by Kevin A. Morrison

An interdisciplinary study of British liberalism in the nineteenth century'Victorian Liberalism and Material Culture' assesses the unexplored links between Victorian material culture and political theory. It seeks to transform understanding of Victorian liberalism's key conceptual metaphor - that the mind of an individuated subject is private space. Focusing on the environments inhabited by four Victorian writers and intellectuals, it delineates how John Stuart Mill's, Matthew Arnold's, John Morley's, and Robert Browning's commitments to liberalism were shaped by or manifested through the physical spaces in which they worked. The book also asserts the centrality of the embodied experience of actual people to Victorian political thought. Readers will gain new historical and literary understanding and will be introduced to an innovative methodology that links material culture and political theory.Key featuresAddresses interaction between British liberal thinkers and their workplaces as an essential component in your consideration of nineteenth-century liberalismEnhances understanding of Victorian literature and culture and the history of architecture and design through an interdisciplinary approachBridges differences of perspective between students of material culture and political theoryBased on extensive research in British and American archives, utilizing recently unsealed record

» Have you read this book? We'd like to know what you think about it - write a review about Victorian Liberalism and Material Culture book by Kevin A. Morrison and you'll earn 50c in Boomerang Bucks loyalty dollars (you must be a Boomerang Books Account Holder - it's free to sign up and there are great benefits!)

Kevin A. Morrison is an assistant professor in the Department of English at Syracuse University.

A Preview for this title is currently not available.
More Books By Kevin A. Morrison
View All