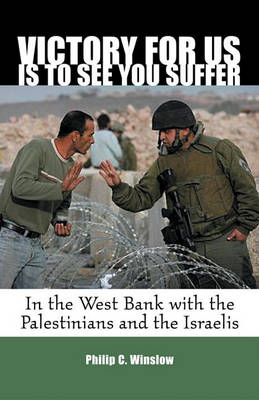 Victory for Us is to See You Suffer

In the West Bank with the Palestinians and the Israelis

During the second Palestinian intifada, Philip C. Winslow worked in the West Bank with the United Nations Relief and Works Agency (UNRWA), driving up to 600 miles a week in the occupied territory. He returned to the region in 2006. In this book, Winslow captures the daily struggles, desperation, and anger of Palestinians; the hostility of settlers; the complex responses of Israeli soldiers, officials, and peace activists; and even the breathtaking beauty of nature in this embattled place.

Buy Victory for Us is to See You Suffer by Philip Winslow from Australia's Online Independent Bookstore, Boomerang Books.

» Have you read this book? We'd like to know what you think about it - write a review about Victory for Us is to See You Suffer book by Philip Winslow and you'll earn 50c in Boomerang Bucks loyalty dollars (you must be a Boomerang Books Account Holder - it's free to sign up and there are great benefits!)

Philip C. Winslow has been a journalist and foreign correspondent for more than twenty years; he has worked for the "Christian Science Monitor, The Toronto Star, Maclean's" magazine, ABC radio news, CTV News, and CBC radio. He also served in two United Nations peacekeeping missions and spent nearly three years living in the West Bank. He is the author of "Sowing the Dragon's Teeth: Land Mines and the Global Legacy of War." "From the Hardcover edition."

A Preview for this title is currently not available.
More Books By Philip Winslow
View All