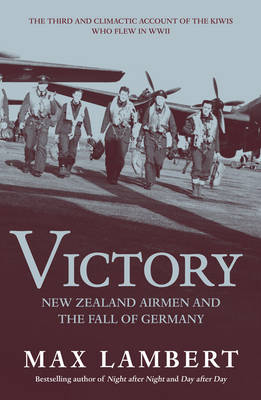 The definitive account of the New Zealand air crews' heroic and often deadly role in the dramatic and dangerous invasion of Europe in 1944 to the fall of Berlin the folliwng year.

'Just another name, another place, another time for dying.' From hunting U-boats over the heaving waters of the cold Atlantic to dropping supplies for the Resistance and towing the gliders carrying paratroopers and weapons at Normandy, Arnhem and the Rhine crossing, the New Zealand airmen who fought with the RAF played an extraordinary role in the final chapters of World War II. In Victory, bestselling author Max Lambert shares the vivid, inspiring and previously unpublished stories of those young fliers - some still teenagers - who lived and died in the service of their country during the invasion of Normandy in 1944. Commemorating the 70th anniversary of D-Day and the beginning of the end of the war, Victory is both a thrilling account of courage and sacrifice, and a moving tribute to a passing generation of true heroes. PRAISE FOR MAX LAMBERt 'Night After Night is a classic' - tom Empson, former Mosquito pilot 'A remarkable book' - Matthew Wright (reviewing Day After Day), NZ Listener

» Have you read this book? We'd like to know what you think about it - write a review about Victory book by Max Lambert and you'll earn 50c in Boomerang Bucks loyalty dollars (you must be a Boomerang Books Account Holder - it's free to sign up and there are great benefits!)

Max Lambert is the author of two previous military histories for HarperCollins: NIGHT AFTER NIGHT and DAY AFTER DAY. These books recount the exploits and bravery of the Kiwi airmen who fought in the RAF during WWII.

A Preview for this title is currently not available.
More Books By Max Lambert
View All